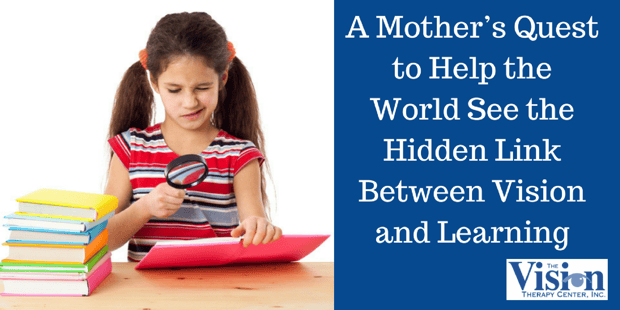 Wendy Rosen’s book, The Hidden Link Between Vision and Learning, is more than a book.  It’s part of a relentless quest to educate and ultimately open eyes to an issue with far-reaching societal implications.

Wendy Rosen has the fire. We’ve seen it before; the fire that catches when a person realizes how much vision and learning are linked. 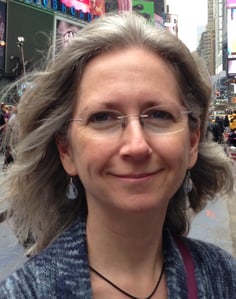 The fire reflects a feeling that something is not right in this world. Children (and adults) are suffering needlessly because parents, educators and medical practitioners are either unaware of the impact a person’s functional vision has on learning, or unwilling to accept the reality.

“We’re not vision literate,” Wendy said. “Few people are aware that this category of learning disabilities even exists.”

Unless you’re a developmental optometrist or vision therapist, the fire typically catches when someone you love suffers from a functional vision problem. For Wendy, it was her daughter Sara.

The story is very similar to others we’ve documented on our blog. Sara was starting to struggle in school as a second grader.  Wendy noticed that her daughter wasn’t able to finish her schoolwork, and that her handwriting was regressing.

“Her handwriting was better in kindergarten than in second grade,” Wendy said.

When Sara entered the third grade, things went downhill.  Her symptoms worsened, and she became more stressed out about school. Although she had been teaching elementary school for many years, Wendy knew that the family needed an impartial evaluation to find out what was wrong with Sara.

No One Knew Why She was Struggling in School

Sara underwent an evaluation at her school, but all of her scores were in the average to high range -- except for one score, which was disproportionately lower.  Her handwriting and written expression were two grade levels lower.

Despite the high marks elsewhere, the low score prompted the school to classify her as “special ed,” much to Wendy’s bewilderment.  She became frustrated because the school seemed just as confused and unclear about the root cause of the problem as she was.

“When we asked why Sara was two grade levels below, they couldn’t offer an explanation,” she said.

Fortunately, someone else could.

The family consulted privately with another psychologist outside of the school.  When the doctor saw the low test score, she told Wendy that her daughter might be suffering from a vision-related learning problem.

The Rosens were referred to a behavioral optometrist, and Sara was diagnosed with convergence insufficiency.  “She was seeing double, and no one knew,” Wendy said.

More testing indicated there were other deficits in her functional vision, which explained the writing deficiencies.  Wendy and the family had their answer, but they also had many more questions, primarily: How did no one know about this issue?

“As a teacher, I was astonished I had never heard of it,” Wendy said.

From Struggling in Second Grade to Graduating With Honors

The end of their search for answers was just the beginning in many ways for the Rosens.

For Sara, she underwent vision therapy to help her overcome her functional vision problems. Vision therapy includes a series of activities and exercises designed to improve visual skills. It trains the entire visual system - the brain, the eyes, the visual pathways - to work effectively.

Vision therapy changed her life. The child who had struggled in second grade went on to become a National Honor Society member and graduate from high school with high honors. She is now a senior in college. “I can’t imagine her life had we not discovered this,” Wendy said.

Sara’s life was not the only one changed by vision therapy. The experience had unveiled a health and educational issue that was much bigger than one family. And it launched a new chapter in Wendy Rosen’s life.

No Mechanism to Handle the Problem

Wendy started to do a lot of research.  She learned that functional vision problems, like convergence insufficiency, are not detected by typical vision screenings, and that most teachers like herself are unaware the issue even exists.

She discovered that these problems are widespread. Vision problems affect learning in 1 in 4 children -- in convergence insufficiency, they are estimated to affect 5-8% of the population.

These issues often go unrecognized and untreated, and this can hit hard, causing lives to spiral downward. There is a direct link between functional vision problems and one of our most vulnerable populations -- vision issues that impact learning are present in 75% of the juvenile delinquent population.

“These kids fall through the cracks,” she said. “They don’t think they’re smart enough, when really the true cause of their struggles has been missed.”

The educational system as a whole does not have a mechanism to handle vision-related learning problems, but this needs to become common knowledge. The world needs to know about them.

The Journey Becomes a Book

The next chapter in her life actually became a series of chapters - a book. For 12 years, Wendy had researched the link between vision and learning, and she conducted numerous workshops and worked with child study teams.

She collected all her research and discoveries, and distilled it into a book called The Hidden Link Between Vision and Learning. The book chronicles Sara’s remarkable journey, and details much of the research in the field. 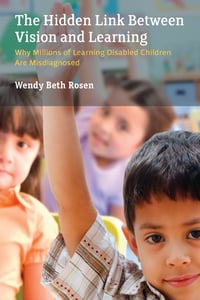 Wendy is grateful that she found a publisher willing to help the book see the light of day. “This knowledge is so critical -- it has the potential to change not only individual lives, but it can have an enormous societal impact as well,” she said.

But as any writer will tell you, writing the book is half the battle. Now began the difficult task of spreading its message.

How We Can Uncover the Hidden Link Between Vision and Learning

Wendy has been promoting the book as best she can, performing outreach and talking to anyone who will listen. Hear her podcast interview with the Dynamic Duo for an example. The Dynamic Duo is two developmental optometrists whose podcast centers on vision-related issues.

But this will be a long slog, primarily because there are so many institutional and societal obstacles in her way.  We can move forward, Wendy believes, but it’s going to take some work on a number of fronts, including:

1. Explaining what vision really is.

“The field of education is missing a significant pool of knowledge about a critical aspect of child development” Wendy said. Vision development and visual function, and how these processes affect learning, are not understood in the educational sphere. Yet vision is our dominant sense, occupying 80% of the neurological territory in the brain, and is responsible for processing this same percentage of information in our day-to-day lives.

The methods we use to assess vision are outdated. The Snellen eye chart, invented in 1862, only detects 5% of vision problems in children. “All the data we’ve learned about vision since then is not factored into the evaluation of kids,” Wendy said. “We should have a universal method for comprehensively evaluating visual skills, so if anything is deficient, it would be caught and treated.”

Educators, pediatricians, policymakers -- anyone who works with kids needs to be educated about functional vision problems. The issue needs to be dealt with on a policy level, and school curricula and learning design need to support a child’s visual development.

Awareness about functional vision problems has suffered from a lack of collaboration among medical practitioners, educators and policy makers. One of the most immediate impacts can come through interdisciplinary approaches to the issue.

This example of a pediatrician teaming up with occupational therapists and developmental optometrists is a textbook example of how an interdisciplinary approach can open eyes and solve problems.

Wendy has undertaken a monumental task.  She’s finding it difficult to get people’s attention about the book, as people are immersed in their own issues.  “Everybody is spread thin,” she said. “That’s challenging.”

The stakes are too high not to fight the good fight.  We are imposing more and more demands on kids academically, without the proper support mechanism in place for those who encounter challenges.

It’s the need to create a better system for kids like Sara that fuels Wendy’s fire.

“What I hope will come of this is that we will be able to create some sort of new paradigm, in which we redesign curricula and rethink learning standards that align with the developmental stages that children progress through, and support these rather than undermine them,” she said. “Otherwise, more and more kids will encounter these challenges.”