Dr. Christina Master is not an optometrist. She is a sports pediatrician. Yet she’s one of the co-authors of a study that revealed 69% of concussed adolescents suffer from functional vision problems. It’s another example of doctors from different disciplines joining together to create awareness about the concussion-vision link.

Christina L. Master, MD, FAAP, CAQSM, is a sports medicine pediatrician at the Children’s Hospital of Philadelphia. Her expertise is in primary care sports medicine and brain injury medicine.

She’s also one of seven co-authors of the prevalence study “Vision Diagnoses are Common After Concussion in Adolescents.” Among its findings, the study showed that out of 100 adolescents diagnosed with a concussion, 69% were also diagnosed with a functional vision problem.

This study is a collaboration between sports medicine pediatricians, developmental optometrists, and a nurse practitioner. It’s indicative of a multi-disciplinary movement that’s generating awareness about functional vision problems and vision therapy as a treatment.

Dr. Master began her career as a medical educator, training pediatricians who were residents in general pediatrics.  After a year-long fellowship in sports medicine, she began to specialize in pediatric sports medicine in 2011. 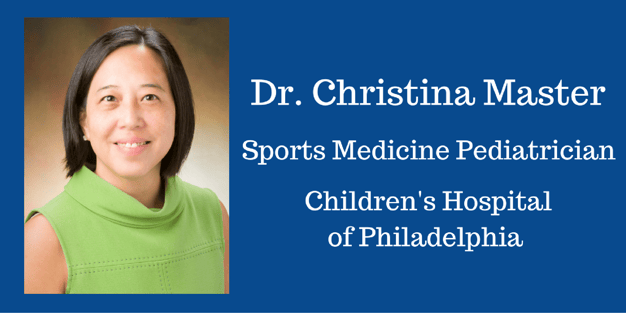 As her practice expanded, she began to treat more children with concussions and she and her colleagues became aware of a growing trend among their patients.

“We noticed that a number of patients had vestibular ocular problems,” she said. “They would complain of dizziness, visual fatigue and eye tracking issues.” The issues were often undetected by other medical practitioners working with the patient, and Dr. Master herself was uncertain how to best deal with the vision problems.

Successful Referrals for Vision Therapy Get the Ball Rolling

Michael Gallaway, O.D, FCOVD, FAAO, is a developmental optometrist. He specializes in vision therapy, which uses a series of activities and exercises to treat functional vision problems. (We’ve blogged about his research on the link between brain injury and vision.)

They include the functional visual skills of eye focusing, eye tracking and eye teaming. (It should be noted that eyesight is one of the many visual skills.)

Dr. Master visited Dr. Gallaway’s practice, and learned more about vision therapy. She’d heard about it in the past, but had never spoken extensively with a developmental optometrist about the science behind the approach.

She began referring patients to Dr. Gallaway, and was pleased to see patients improving their functional vision. It was the first successful step in what was to be an ongoing collaboration.

Research Needed: The Genesis of the Concussion Study

The more Dr. Master and Dr. Gallaway talked, the more the subject turned to research. Dr. Mitchell Scheiman, also a developmental optometrist, soon joined the conversation, and they agreed to collaborate on a prevalence study.

A prevalence study is a type of observational study that analyzes data collected from a population, or a representative subset, at a specific point in time. In this case, the doctors analyzed the number of concussed children that were suffering from a functional vision problem.

The results were “striking and notable,” because the occurrence was at a much higher rate than the general pediatric population. “Out of the patients referred to our clinic for a concussion, 69% had a visual diagnosis,” Dr. Master notes.

The questionnaire proved to be a remarkably accurate indicator of the presence of a functional vision problem, primarily because of the wording on the survey.

Dr. Master normally uses a standardized concussion symptom survey that included questions about general traumatic brain injury symptoms like headaches, and nausea. There was only one question about vision and it was very general.

Functional vision problems are very specific, and include symptoms like “words jumping off the page” and seeing double. Children don’t always recognize these symptoms as being abnormal, so the correct wording of the questions on the survey was important for detection.

The Concussion-Vision Link Gets Out: Sharing the Information With Other Practitioners

Dr. Master and her colleagues began to talk about the study’s findings, but they didn’t keep the conversation within their specialities

Because so many disciplines are involved in brain injuries – emergency medicine physicians, neurologists, pediatricians, optometrists, ophthalmologists, physical therapists, occupational therapists - the results of the study were shared with many different groups. 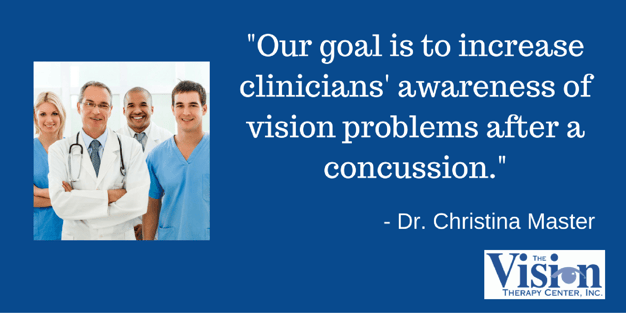 For example, Dr. Master presented at a national meeting for the Pediatric Research in Sports Medicine, a medical society for sports medicine physicians, surgeons and other allied health sports professionals. “Our goal is to try and increase clinicians’ awareness of vision problems after a concussion,” she said. “We want to educate them in the clinical approach to diagnosing and intervening.”

The reaction to the study among medical practitioners and parents has been extremely encouraging, to say the least. Here are a few examples:

General pediatrics: Dr. Master has seen great acceptance among pediatric doctors of the study’s screening tool and vision therapy as a treatment method.  “Doctors view concussions as an area where they feel under-trained,” she said. “They want to have a tool to assess the kids.”

Dr. Master has launched a training program for pediatric doctors that shows them how to use the survey and assess the symptoms. They’ve reached out to over 30 different practices in their area, and are “training trainers” to help spread the word.

Ophthalmology: Perhaps due to a lack of collaboration and idea sharing among medical practitioners, there has been a lack of acceptance among ophthalmologists toward vision therapy. Yet studies by Dr. Master and Dr. Gallaway have been changing outlooks.

Look no further than Dr. Master’s own hospital for a shining example. After reviewing the studies and the data, the division chief of ophthalmology at Children’s Hospital of Philadelphia (CHOP) has agreed that an investment in vision therapy for children with concussion is worth pursuing. CHOP is now planning on launching its own vision therapy unit.

Parents: Desperate to find help for their struggling children, parents may not have the medical background to assess prevalence studies. But they know results when they see them. According to Dr. Master, families who have pursued vision therapy “have all been thrilled” with the outcome.

With a prevalence and retrospective study under their belt, the next logical step for Dr. Master and Dr. Gallaway is a randomized clinical trial. They are in the process of seeking out funding for a double-blind study to investigate the efficacy of vision therapy with concussion patients. 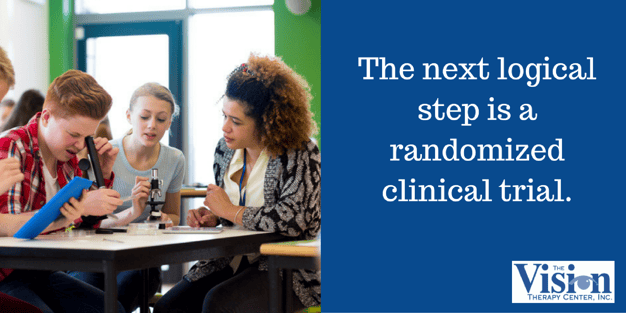 Their efforts serve as a perfect example of how a multidisciplinary approach can provide improved outcomes for patients. Collaboration among medical disciplines can be a very beautiful thing. Just ask the happy and relieved parents of the patients helped by Dr. Master and Dr. Gallaway.

Now we’re asking YOU to collaborate with the doctors, too. Please share this message through social media and help us increase awareness of vision therapy as an effective treatment for functional vision problems. It’s the best way to applaud the work of Dr. Master and Dr. Gallaway!