Entrepreneur and Best-Selling Author Uses ADHD as His Superpower

Nearly 10% of children have ADHD according to the Centers for Disease Control. What happens when these kids become adults? Peter Shankman says ADHD can be their “superpower”—if they learn how to use it.

Shankman credits his own ADHD for helping him become an incredibly successful entrepreneur, international keynote speaker, and best-selling author of books on a variety of subjects, including ADHD.

Shankman’s “Medicine” for ADHD and Success

Shankman says people with ADHD have a different brain chemistry that can make seemingly normal activities difficult. Although he wasn’t formally diagnosed with ADHD until his 30s, he says by then he had unknowingly been “beneficially self-medicating” himself. “I wasn’t just managing my ADHD. I was using it to my advantage.” 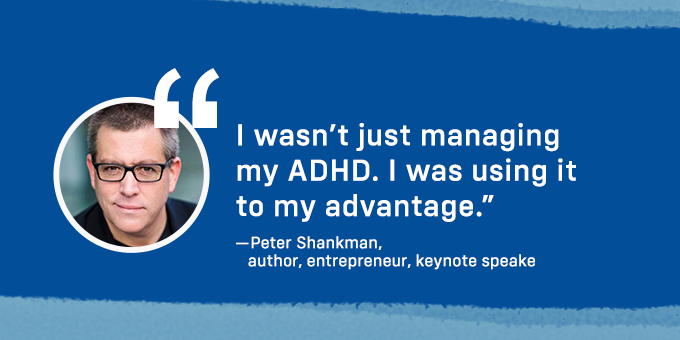 Skydiving, training for triathlons, taking what some considered huge business risks—Shankman says these things were actually giving him the dopamine, serotonin, and adrenaline hits that allowed him to focus, and fueled him through a highly productive day.

“Once I realized this, I saw a path to get even more from my brain. I realized that people with ADHD think in a way that’s faster than normal. But they need to know how to use that ability. If your brain is like a Lamborghini, you need to learn how to drive it—or else you’re going to crash into a tree.”

Shankman has said that resolutions aren’t the key to success—rituals are. And according to him, this holds true for children with ADHD, adults with ADHD, and “normal speed” people.

So even if you’re not into jumping out of planes or training for Ironman competitions, Shankman says sticking to basic daily routines can be life-changing. Here are some of his most important ones:

A Gift, Not a Curse: Shankman’s Message to Parents

So what advice does Shankman have for parents? “If you’re concerned your child might have ADHD, by all means get them evaluated by a professional. We didn’t have that option when I was a kid. Putting a name to something your child has been struggling with could be a big help,” says Shankman.

And if they do have ADHD, he says you need to remember, “Your child is not broken. Your child is gifted. They just have a different brain than most kids, and it’s going to take some time to learn how to best use that brain. But it doesn’t mean they can’t live their best life possible.”

The Similarities Between ADHD and Functional Vision Problems: The Vision Therapy Center’s Message to Parents

Shankman’s insights and experience can be helpful to children with ADHD, and for their parents as well. But not all children who exhibit ADHD-like symptoms actually have ADHD.

If you suspect your child has ADHD, or even if your child receives an ADHD diagnosis, The Vision Therapy Center suggests the next thing you do is rule out a functional vision problem by having your child tested.

Why? Because many people—including physicians—don’t realize that the symptoms of ADHD and functional vision problems can be strikingly similar:

Sources:
*The Centers for Disease Control and Prevention’s shortened form of ADHD criteria based on the Diagnostic and Statistical Manual of Mental Disorders, Fifth Edition (DSM-5)
**American Optometric Association

It’s also possible that a child can have both a functional vision problem and ADHD. If the Functional Vision Exam reveals a problem, we can know for certain that it’s contributing to the difficulty with attention.

It’s critical that functional vision problems are identified because they can be treated with an individualized program of optometric vision therapy.

If you think your child's ADHD-like symptoms could be a functional vision problem, schedule a Functional Vision Exam.

For more information on Peter Shankman’s insights on ADHD, check out his podcast, Fasterthannormal.com, the #1 ADHD podcast on iTunes, and his book Faster Than Normal: Turbocharge Your Focus, Productivity, and Success with the Secrets of the ADHD Brain.