Like many 9-year-old boys, Luca didn’t seem interested in school. But his struggles were beyond the norm. By the time he entered 3rd grade, he was a year and a half behind his classmates in reading, yet his eyesight tested 20/20.

Dr. Jankowski knew that the 20/20 measurement wasn’t telling the whole story.  And like any good parent, she dug deeper to find an answer to Luca’s struggles.

“He Didn’t Even Realize What He Was Doing”

For years, Amy (we’ll refer to Dr. Jankowski as Amy for this post) had been watching Luca’s performance slowly worsen in school. She herself had tested his eyesight and performed a basic binocular exam. Luca tested 20/20. Yet still he struggled.

“One night I checked on his math homework,” Amy recalls. “He was doing math, and his calculations were scattered all over the page. But he didn’t even realize what he was doing.” 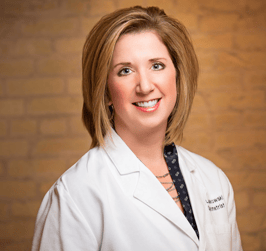 At this point, she knew more than just Luca’s eyesight needed testing. Amy has been referring patients to The Vision Therapy Center for years because she knows that standard eye exams like the one she had given Luca don’t always detect functional vision problems.

Functional visual skills include eye teaming, eye tracking, and eye focusing, and can influence depth perception and your ability to read a line of text on a page. Amy, a primary care optometrist, does not treat these types of issues at her practice.

The Exam: Luca is a SMART Kid 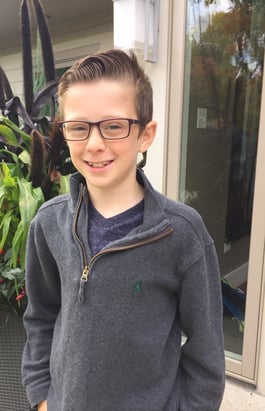 Taking Luca to be evaluated was an eye-opening experience for Amy. After Luca completed the functional vision test, Dr. Kellye Knueppel of The Vision Therapy Center revealed the results.

“I can’t even believe he’s been doing halfway decent in school,” Dr. Knueppel said. “He must be really smart!” 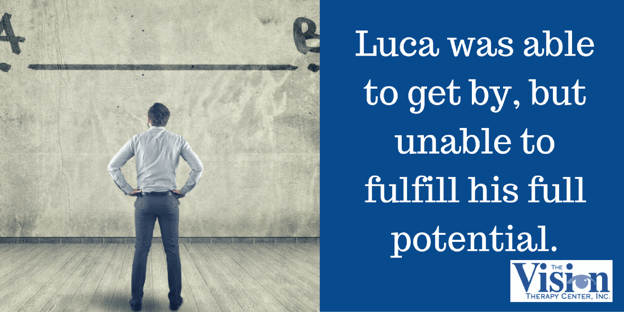 Dr. Knueppel has seen many patients like Luca before. Often children and adults struggle with a functional vision problem, and their visual systems adapt as best they can to the issue -- just like Luca’s did. He was able to “get by,” but unable to fulfill his full potential.

Luca is a smart kid, and his intelligence was allowing him to tread water in school. But there was no way to avoid how his functional vision problems were affecting him in other areas.

Didn’t Like Ball Sports, Won’t Look You in the Eye

After the exam, Amy and Luca were saying their good-byes to Dr. Knueppel. But Luca wouldn’t look at Dr. Knueppel.

“I told him to look at her, but Dr. Knueppel told me he couldn’t. She explained to me his spatial orientation was too severely disturbed,” Amy recalled. “It was uncomfortable for him to look people in the eye.”

With the diagnosis, Luca’s other struggles in life began to make sense. He had never liked ball sports, and had always been somewhat clumsy. It wasn’t that he inherently disliked sports, it was because his poor spatial orientation had made it nearly impossible to participate.

All that was about to change with vision therapy. But it wouldn’t be easy.

“He was Starting to Feel Like He was Stupid”

As we mentioned, Amy has referred numerous patients to The Vision Therapy Center for vision therapy treatment. She knew how much work and expense was involved. “I always tell patients not to enter into it lightly,” she said.

Vision therapy is no quick fix. It involves using activities and exercises to retrain the visual system.

But for Amy and her family, it really wasn’t much of a choice.  “Luca was starting to feel like he was stupid,” she said. “We knew it would take a lot, but we made that commitment.”

As they expected, vision therapy took dedication and hard work. But the results were amazing.

Within six months, Luca had caught up to his peers in terms of reading levels.  “His homework was taking 20 minutes,” Amy said. The math problems were no longer scattered all over the page. For the first time in his life, Luca could see where he was writing on the page. 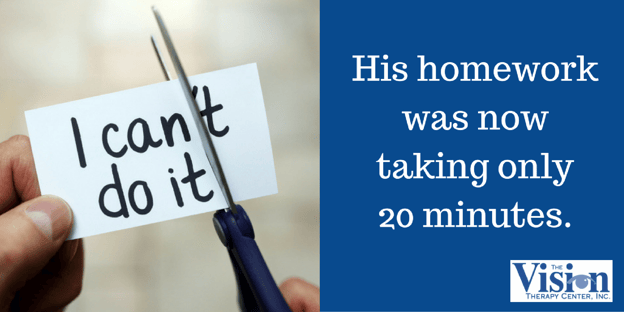 The success in school extended outside the classroom.  Luca began to participate in sports -- “He LOVES to play LaCrosse” -- and his self-confidence increased.

Amy and the Jankowskis had no qualms about the time and financial commitment. Her only regret was that she didn’t get Luca in for vision therapy sooner. “There were times when I told him he wasn’t trying hard enough,” she said. “But his symptoms kind of crept up on us.”

Lessons Learned: For Optometrists, for Schools, for Parents

Luca’s struggles and successes have made Amy a fierce advocate for vision therapy. She believes schools and primary care optometrists need to develop a greater understanding of how functional vision is different than 20/20 eyesight. 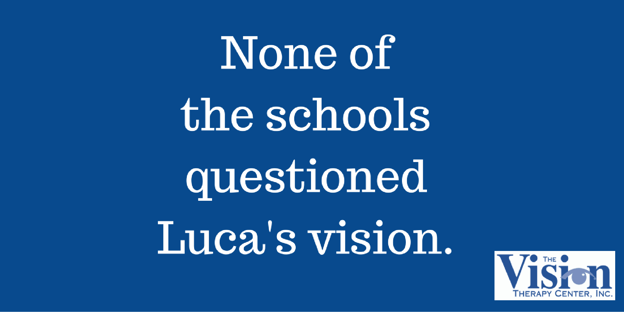 “Not once did any of the schools question his vision,” she said. Luca had been screened for his eyesight, and he’d passed with flying colors. But the Snellen eye chart only gauges your ability to see a specific size of letter at a certain distance, not your ability to team, focus and move your eyes.

Amy also acknowledges that despite their best efforts, optometrists can sometimes miss functional vision problems. “Most of us are primary care optometrists,” she said. “Dr. Knueppel and her team are developmental optometrists. They specialize in these types of issues.”

There is a simple solution. Parents, educators and optometrists can use the Vision Quiz found on The Vision Therapy Center’s homepage. It’s an effective, research-based tool that can detect the symptoms of functional vision problems.

If you know of a child or an adult who is struggling in school or work, they may be suffering from the same type of issue as Luca. Click on the button below and take the Vision Quiz -- it could be the first step toward a solution!

OPTOMETRISTS AND MEDICAL PROFESSIONALS: Scroll down to see Luca’s clinical data before and after vision therapy.

In this section, we share some of Luca’s clinical data for fellow optometrists and other interested medical professionals.

At the final progress exam it was noted that Luca’s reading continued to improve.  He began playing Lacrosse and enjoys doing activities outside which he hadn’t enjoyed before therapy.  Homework was taking much less time to complete, decreasing from 1-2 hours a night to 20 minutes a night.