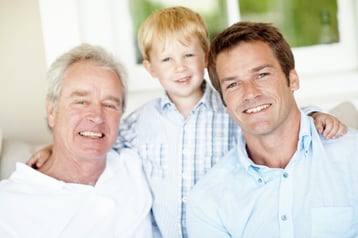 If we had a nickel for every time someone asked us if they were too old to be treated for lazy eye, we could provide vision therapy for every amblyopia patient on the globe. But the questions keep coming, perhaps due to a long-ago study and lack of understanding of how vision works.

We post frequently about functional vision problems, such as strabismus (turned or crossed eye) and amblyopia, which is commonly referred to as lazy eye. And our posts always draw the same question: “Am I too old for treatment?”

With vision therapy, the answer is no. Vision therapy uses a series of vision-based activities to retrain the visual system to work properly.

In the case of amblyopia patients, the eyes are not working together as a team, and as a result, the brain sees two very different visual images. If the images were similar and the eyes were pointed at the same spot when looking at an object, the brain could combine the images into a single, 3D image.

But because the eyes are not in alignment and looking at two places, the images are slightly off, resulting in double-vision. As a result, the brain ignores one of the signals (this becomes the lazy eye) and uses the one, clear 2D image. That’s why depth perception is impaired with amblyopia.

This condition can be corrected. Thanks to the brain’s plasticity, the brain can be retrained to see similar images with each eye. This can occur at any age (although it does become more difficult as you get older).

So why are so many people under the impression they’re too old?

People sure love cats, don’t they? We do too, except a few of them have inadvertently made our lives very difficult.

What do cats have to do with lazy eye?  It stems back from a study performed by David Hubel and Torsten Wiesel at the Harvard Medical School.

Hubel and Wiesel performed a number of experiments on sensory processing, including vision.  They deprived cats the use of one eye, which led to the discovery of what we mentioned earlier: The brain will ignore signals from the “lazy eye” and use the image from the properly functioning eye.

However, it should be noted that Hubel and Wiesel did not conclude that visual skills could never be corrected. They did not study the effects of vision therapy on the visual system.

Dr. Sue Barry noted that the doctors’ research did not include discussion about vision therapy, which helped her overcome strabismus. In fact, in Fixing My Gaze, a ground-breaking book by Dr. Sue Barry, she recalls when she reached out to Dr. Hubel regarding the study.

With considerable trepidation, I drafted a letter to Dr. David Hubel and received his response shortly thereafter. To my enormous relief, he didn’t discount or dismiss my story. In fact, he felt that my stereovision would continue to improve as I continued to pursue vision therapy. In his letter and during our subsequent discussions, Hubel explained to me that he had never attempted to correct the strabismus in animals in order to examine the effects of straightening the eyes on visual circuitry. It would have been difficult to realign the eyes surgically and even hard to train the animals with vision therapy. So, he couldn’t be sure that the effects of strabismus on binocular circuitry were permanent.

Yet somehow this misconception occurred and still prevails. In fact, in researching this article, we noticed that the Wikipedia article on David Hubel includes this section:

This has important implications for the understanding of deprivation amblyopia, a type of visual loss due to unilateral visual deprivation during the so-called critical period. These kittens also did not develop areas receiving input from both eyes, a feature needed for binocular vision. Hubel and Wiesel's experiments showed that the ocular dominance develops irreversibly [verification needed] early in childhood development.

Needless to say, once we discovered this mistake we began efforts to correct the section.  But it’s amazing that the misinterpretation prevails today, and still has such a profound impact.

Why Not Use Modern-Day Research?

Myths can be powerful and long-standing. Misinterpreted data seems to have the same staying power.

What’s unfortunate about the Hubel and Wiesel experiment is that it seems to have taken precedence over all of the current research that’s been done on how the visual system can be retrained.

Many of the ground-breaking studies and research we detail in this section of our website reveal how the visual system can be retrained.  We’ve proven it in a clinical setting, treating thousands of patients for functional vision problems.

Yet the staying power of that cat study is amazing.  Perhaps it’s because people don’t understand truly how vision works, and that the brain has plasticity and the ability to change.

What can we do?  We can write posts like these. We can become educated about how vision truly works, and when we see mistakes like the one on Wikipedia, we can call out incorrect information.

Maybe the only way to overcome this misconception is to perform some vision therapy for cats. But our time is limited. We’d rather spend our resources improving the lives of children and adults with amblyopia.