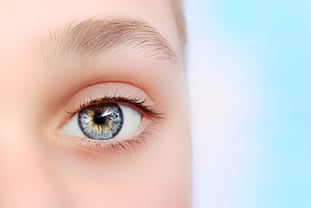 Young children learn and develop the ability to use their two eyes together as a team, called binocular vision. Amblyopia is when the use of binocular vision isn’t developing the way it should. We’ll take a closer look at amblyopia, show how the brain adapts and discuss symptoms and treatment.

Functional Vision - In a properly functioning visual system, when the eyes focus on an object, the brain combines these two similar images into one complete image, enabling the person to see things clearly, and in 3D.

Amblyopic Visual System - For a child with amblyopia, his or her brain is not able to combine the respective images correctly into one clear, crisp image. As a result, depth perception is diminished, and the person may experience double vision.

How the Brain Compensates

The brain is an incredibly adaptive organ. If you have poor sight in one eye and better vision in the other, the brain will shut down that image (it doesn’t want to deal with a blurred image or double vision) and focus on one clear image from one of the eyes.  It effectively ignores the other image, even though depth perception is impaired.

Think of it as the brain’s “coping technique.” However, this coping technique isn’t the most efficient way of going about things. It presents some long-term challenges that can significantly compromise quality of life.

What are the Ramifications?

When the brain uses the eyes this way, poor visual acuity (blurry vision) can develop in one of the eyes. That’s because the brain is paying attention only to the image in the eye with better acuity. Because of this, the brain doesn’t develop good acuity in the eye with the poorer quality image. Over time, the brain learns to suppress detailed information in the amblyopic eye altogether, depending solely on the eye with clearer sight for vision.

People require good vision in both eyes to perceive depth and see the world in perfect 3D. Because of this, suppressing information from one eye can create poor depth perception and spatial awareness, which can lead to clumsiness, difficulty in sports, and problems in school.

Children are highly adaptive, learning to circumvent or adapt to their vision problems, especially when they grow up with them. For this reason, a child’s amblyopia may go unnoticed until adulthood. That’s why comprehensive eye exams are essential in identifying the condition early. Furthermore, the earlier you catch it, the easier it is to fix with vision therapy.

Symptoms can be difficult to detect, especially because the child has learned to adapt to the functional vision problem.

They can include extra clumsiness, as their perception of the space around them can be poor. Your child may also experience headaches or watery eyes. They may have trouble with their attention span. It is common for these symptoms to surface when the visual system is being most challenged, like during homework.

Traditionally, patching and/or prescribing glasses have been used to treat amblyopia, often for children at a younger age. Today, studies have shown that combining vision therapy with patching is a more effective treatment than just patching alone.

Making the “lazy eye” see more clearly by patching alone does not mean that the brain will learn to combine the information from the two eyes effectively. As a result, the clarity of vision with the “lazy eye” can regress after patching has stopped.

The reason vision therapy is so important in amblyopia treatment is that it gets at the root cause: The two eyes do not perceive visual space the same and therefore cannot work together. The goal is to train the brain to process information from each eye as equally as possible, and then train to get both eyes to work together as a team.

While many people with amblyopia can function at a relatively high level, the condition also comes with some serious limitations. Understanding the condition and identifying the symptoms are critical first steps in getting your child the help he or she needs.