It was three years ago that Kay Saemann took a bad fall off a horse. The fall was followed by three years of vertigo, dizziness and nearly losing her job. But Kay has recovered, thanks to vision therapy.

Looking back on the past three years, Kay Saemann’s life could be, at best, described as a nightmare. 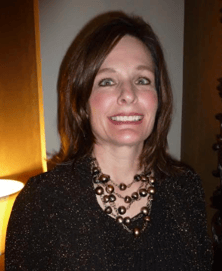 In 2014, she suffered a serious fall from a horse, resulting in a traumatic brain injury.  Even though she recovered enough to return to work, ongoing bouts of vertigo and other types of dizziness problems left her mentally broken and on the verge of losing her job.

“I couldn’t function,” she recalled. “I even had slurred speech.”

Finding Herself in a Very Dark Place

Kay said that following her accident, “I felt like I was under the influence.”

Everyday behavior was nearly impossible. She would have to pull over during her hour commute, and she often staggered during grocery shopping, having to stop in the aisles due to dizzy spells.

“When I walked, it felt like I was on a roller coaster,” she said. “It was not a pretty experience.”

As a supply chain analyst, she couldn’t facilitate meetings because she couldn’t look from her computer to an overhead projection screen.  Her boss had put her on a performance improvement plan, telling her, “It seems like you’re there, but you’re not.”

Her road to recovery was moving along at a snail’s pace.  After her fall, she ping-ponged back and forth between a physical therapist and a doctor in an attempt to relieve her of ongoing vertigo. The progress was slow. Too slow.

Finally, a neighbor overheard her discussing her symptoms, and recommended she see a developmental optometrist in Appleton.  Kay made the drive from Sheboygan and she was diagnosed with a functional vision problem. She began vision therapy.

Eventually, the commute from her Sheboygan home to Appleton proved too taxing, and she received a referral to The Vision Therapy Center.

Not one to shrink away from a challenge, Kay was eager to finish her therapy and resume her normal life. “They told me my therapy would take six months,” she said. “I told them I would get it done in three.”

Working Hard to Get Back to Normal

Under the care of Dr. Brandon Begotka and The Vision Therapy Center staff, Kay began to improve.  She was having difficulty efficiently converging and diverging, which was contributing to her vertigo.

Vision leads the process of sensory integration, which is critical to deriving meaning from and interacting with our environment. When a person's functional vision is not working well, it interferes with this process and the person can feel disoriented. Kay’s treatment would require relearning her functional visual skills.

Kay has no shortage of willpower and determination. She holds three college degrees, and she used that same work ethic on her vision therapy. Gradually, her life began to change, and the vertigo subsided.

“I’m 90% back,” she said. She still has to do vision therapy exercises, but she describes them as being minimal.  And the thought of going backwards, and slipping back into her nightmarish life, keeps her focused on making progress.

Today, Kay feels frustration. Not at her progress, but at the general lack of awareness of vision therapy by medical practitioners and the general public.

“I think there are a lot of people who have the same symptoms, and they are not getting diagnosed correctly,” Kay said.  She recalled challenging her general practice doctors, asking them why the benefits of vision therapy was not common knowledge. She received no answer.

Her vision therapists in Appleton both had similar stories. One had a child in school who had been told, “Your son will never be able to read.” Vision therapy proved them wrong.

“I met this woman the other day who described the exact same symptoms I was having,” Kay said. “I wanted her to know that she should get evaluated by a developmental optometrist.”

Kay Wants to Talk to You

Kay is doing her part to spread the word by telling her story to us.  You can listen to her own words as she describes how vision therapy has helped her recovery by clicking on the audio interview below.

Audio Interview: Find out why Kay Saemann Wants to Share her Story

She would also like to offer up her contact information if you’d like to learn more about her experiences.  Simply click here to email us, and be sure to mention Kay’s name.  We’ll pass along her email address and phone number, and you can speak to her firsthand.

Kay emphasizes if you have typical symptoms of a functional vision problem, see a doctor and be evaluated.  “If I wouldn’t have found vision therapy, I wouldn’t have been able to function and hold a job,” she said.

She also notes that vision therapy is not a quick fix.  “I feel that many people want instant gratification when they are down and out,” she said.  “Or they just want to push a button and feel better. Vision therapy is a process to overcome barriers, but it takes diligence.”

In this section, we share some of Kay’s diagnosis and clinical progress for fellow optometrists and medical practitioners.