Vision Therapy Success - From Hating Reading to Loving It 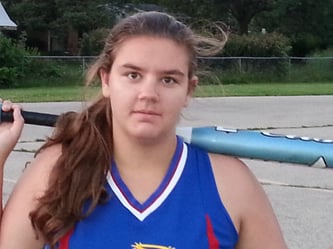 Anna Nelson was in 7th grade when she realized her vision wasn’t as clear as it used to be. Her optometrist said everything was fine, but for Anna, the everyday struggles were very real.

“I couldn’t see things far away,” Anna said. “I couldn’t read for a long period of time either. My eyes would start to hurt or I’d get really tired.”

Her mother, Tina, also noticed the vision problem. Tina could read road signs much easier than her daughter, and found it odd that Anna didn’t like to read considering she had always read to her as a young child.

Finally, Anna asked to visit a different eye doctor. It turned out that Anna’s suspicions were correct - she did in fact have a vision problem. She was diagnosed with Accommodative Insufficiency, which is the inability to make near targets, such as print in a book, clear.

Tina pursued treatment options, and after learning about The Vision Therapy Center, decided to enroll her daughter in vision therapy.

Anna’s vision therapy began the way everyone’s does - with an initial performance exam. Dr. Kellye Knueppel administered her hour-long exam, which included having Anna read to her.

“Dr. Knueppel showed us how Accommodative Insufficiency was affecting Anna,” Tina said. “The bigger the words were in a book, the easier it was for her to read. But normal words were difficult to see. It was like very minor double vision - just enough to make it fuzzy, but not totally unreadable.”

Minor as Anna’s double vision may have been, it was causing her big problems. She noticed her eyes felt extremely strained after just a brief reading session.

The path towards treating Anna’s vision problem began with light treatment. Essentially, Anna would look at a colored light for 20 minutes, at least five nights per week. She did this for six weeks.

“I thought it was really strange at first, and I couldn’t believe I was paying all this money for Anna to stare into a light,” Tina said.

“It seemed odd,” Anna agreed. “I didn’t expect light to help my vision. Actually, I expected just the opposite.”

But sure enough, a month later, their follow-up evaluations at The Vision Therapy Center revealed some improvement. So, they moved on to phase two: Eye exercises.

You’ve probably stretched your body before launching into a workout. But have you ever heard of stretching your eyes and then doing eye exercises? That’s exactly what Anna did for the next five months.

Once she was warmed up, Anna could move into her exercises. These included taping letters or sheets to her wall, and completing letter or picture searches. The purpose was to help Anna gain better control of her eye movements, which was the first step in improving her functional vision.

Meanwhile, Dr. Knueppel wrote a letter for Anna to bring to school explaining that she required specific seating arrangements in the center of the room and closer to the board to remove some of the strain from Anna’s eyes.

“I think that - combined with what we were doing in therapy - played a very major role in her success in school,” Tina said.

All the while, Anna and her mother continued to make her at-home exercises a top priority.

“We saw that it was working fairly quickly, so we knew the benefits,” Tina said. “We wanted to make sure she was doing it.”

Anna began noticing some pretty significant improvements around the three to four month mark, especially concerning reading. By the time her eight months working with The Vision Therapy Center had concluded, those improvements stretched into other areas of her day-to-day life as well.

“Once I got into a book, I couldn’t put it down,” Anna said. “I’ve read maybe five books in the last five months, and that’s how much I used to read in a year. I can also see road signs clearly, which I’m really happy with.”

Her mother was also extremely pleased with her progress. Whereas she once worried about her daughter’s lack of interest in reading, she now feared that she was reading almost too much.

“I almost grounded her for reading for an entire weekend instead of taking care of some of her other obligations,” Tina joked. “But I was so pleased that she was reading for pleasure I decided to let it go. It made me so happy.”

Despite her vision problems, Anna had always been a straight A student. However, now that she could finally read without eyestrain, her academic interests began to change.

Today, Anna is 15 years old and still completes at-home eye exercises five days a week. Her vision will continue to be a work in progress, but Tina said she is thrilled with how far her daughter has come.

“I was surprised at how easy it was to do the vision therapy and what a dramatic difference it made,” Tina said. “In every way imaginable, this was one of the best things we could have done for her. It was a very simple, life-changing event.”