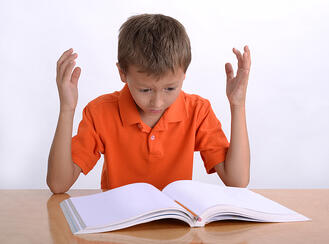 Meet Nicholas. In second grade, he was spending 2-3 hours on homework.  But surprisingly enough to his mother, it wasn’t a case of too much homework - it was convergence insufficiency.  In this success story video, she describes her son’s incredible turnaround as a result of vision therapy.

We’ve seen this before:  A bright young student is struggling in school, yet no one seems to have the answer why.

Nicholas’s mother Kerry hadn’t experienced it, nor did she realize that her son was suffering from convergence insufficiency.  Watch the video for Kerry’s first-hand account, and then read on to learn more about the functional vision problem.

When Nicholas came to us, he was experiencing eye pain while reading.  He rubbed his eyes, and pulled at his left eye.  To read or do schoolwork, Nicholas would get extremely close to the paper.  As his mother described, he was struggling in school.

After performing a Functional Vision Test, we diagnosed Nicholas with convergence insufficiency. This condition occurs when a person has difficulty converging their eyes and focusing them both on a single object in space.

At the three-month mark, we noticed significant improvement. Nicholas was getting close to the paper less frequently, and he was also rubbing his eyes less often.  His focusing had improved, and his eyes were working together more efficiently.

At the six-month mark, we saw a huge jump in progress.  His eye focusing and eye movements had improved significantly, and his reading was improving.  He also had better hand-eye coordination in sports, which undoubtedly made Nicholas a fan of vision therapy.

The impact vision therapy had on Nicholas’s convergence insufficiency is consistent with a landmark study that was conducted by the National Eye Institute.

The double-blind, masked study was a collaboration between optometrists and ophthalmologists, and as Dr. Brandon Begotka noted in a post that detailed the study, “It’s very defensible based on the research methods used and very objective.  It’s very hard to dispute the findings.”

Why do we mention the study in conjunction with this success story about Nicholas?  Because we want readers to understand that the effectiveness of vision therapy isn’t just based on anecdotal evidence. They are the result of a proven, scientifically-based approach to functional vision problems.

We truly enjoy hearing Kerry speak so enthusiastically about Nicholas’s success, and we want you to know that it works for other children as well.  The first step is to determine if your child’s struggles in school are the result of a functional vision problem.

Take our Vision Quiz to see if your child has any of the typical symptoms.  It’s the first step to creating your own success story.