The Fundamental Difference Between an Optometrist and an Ophthalmologist 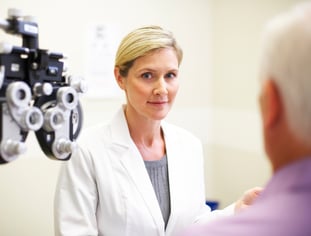 Are there two professions more easily confused than optometry and ophthalmology? There are actually a number of differences between the two, but one in particular could have a significant impact on whether or not you can overcome a functional vision problem.

We are continuously asked what’s the difference between an optometrist and an ophthalmologist. Here are two straightforward definitions:

(For lengthier definitions from The American Optometric Association and the American Academy of Ophthalmology, refer to this previous post.)

The big difference, and perhaps the one that causes conflicting diagnoses and treatment recommendations, is that the majority of optometrists believe that the visual system is a dynamic system.

What that means is that the brain has plasticity, and the eyes and visual pathways can be retrained.  In the event of a functional vision problem, when they eyes aren’t working in tandem, the visual system has the ability to change.

Many ophthalmologists view it as more of a static system.  They feel that in cases like strabismus, the only way to improve a turned eye is through surgery.  They either don’t know or don’t believe that the visual system can and should be retrained - especially since surgery won’t overcome a functional vision problem on its own.

Why This Critical Difference is So Important

Let’s be crystal clear on this point: Not all ophthalmologists subscribe to this point of view.  There are those, including the ones who participated in this ground-breaking study on the benefits of vision therapy in treating convergence insufficiency, that understand the visual system is not static.

Unfortunately, it’s the ophthalmologists who think otherwise that tend to be the most vocal, and don’t provide their patients with a complete understanding of treatment options.

In the case of strabismus, for example, we’ve seen case after case of children (and adults) who have had numerous surgeries to correct their eye turns. These cases, including one involving Dr. Sue Barry, whom we’ve mentioned many times before, are successful for the short-term, but fail eventually.

Why? Because the brain is a major component of the visual system.  In the event of an eye turn, your binocular vision has been compromised.  The eyes can’t focus on the same point in space, and as a result, two drastically different images are being sent to the brain. It can’t effectively combine these images into a unified, 3D image, so it shuts down the signal from one of the eyes.

When surgery is performed, muscles are actually cut and manipulated so that the eyes both point in the same direction.  However, if the eyes are not trained to work in tandem, the brain will be unable to align the images correctly, and actually force the eye to turn again. It’s why strabismus patients suffer relapses after surgery.

This post is not a discredit to the ophthalmology profession.  In terms of diagnosing, treating and managing diseases and disorders of the eyes, ophthalmologists are essential.

But if you’re investigating potential fixes for an eye turn, you must understand why optometrists - especially developmental optometrist - differ from ophthalmologists. The difference in philosophy will translate into whether or not your choice of treatment is a step in the right direction.