She Didn’t Realize How Much She Needed Vision Therapy 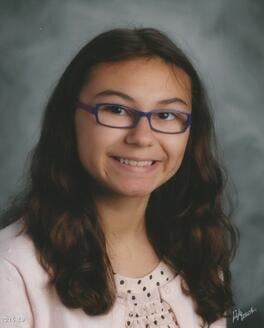 Thirteen-year-old Chalen didn’t think she had a vision problem, despite having a severe case of strabismus. Six months of vision therapy later, she discovered not only how debilitating her eye turn had been, but also how much therapy helped.

“We could tell her depth perception was possibly a little off,” said Chalen’s mother, Julie Penquite Everts. “She would sometimes trip down our stairs, and we didn’t know why. We just thought she wasn’t paying attention.”

But despite her parents’ observations, Chalen resisted the idea that her vision was hampered by a vision problem. After all, she was performing fairly well in school and even playing tennis.

The issue was that her brain suppressed communication with one eye to avoid the confusion of double vision - a common coping mechanism among people with strabismus. In fact, this suppression had existed for so long that Chalen didn’t know any different.

Still, problems persisted. Whether or not Chalen realized it, suppressing one eye restricts normal depth perception and prevents a person from viewing the world in three dimensions.

Furthermore, Chalen’s problems seemed to transcend vision. For instance, her mother noted that she seemed especially sensitive to loud noises (she would later find out that her weakened vision heightened her sense of hearing). So, Julie turned to vision therapy for help.

Instead, doctors diagnosed Chalen with esotropia - an inward eye turn, hypertropia - an upward turn, as well as amblyopia (lazy eye) in her left eye. The diagnoses were severe, but treatable.

“When they told us that they could help her, I cried,” Julie said. “It was amazing.”

Life during therapy wasn’t always easy, Julie admitted. The process wasn’t just limited to in-therapy activities. Chalen also had to complete exercises at home every day, a task that her mother said was difficult at times for a teenager.

“Children get more involved in extracurriculars, so we were running around,” Julie said. We just made the dedication as a family that Wednesday nights were going to be a little crazy for us. Then, doing the therapy every day was a little hard because of her homework, and her eyes were tired. But we were dedicated.”

Additionally, Julie said that Chalen struggled with her self confidence.

“She thought that she was the only one going through this, the only one that had an eye that turned in and didn’t work appropriately,” she explained.

Still, they persisted. At The Vision Therapy Center, doctors broke down the problems that Chalen experienced and began building up those skills one by one.

Early on, doctors helped Chalen learn to control her eye movements. After that, they moved on to localization - teaching her to accurately locate objects in space. Finally, they engaged Chalen with binocular activities to train her eyes to work together and avoid suppression.

These activities included looking at targets through glasses with red and green lens filters. The targets have characters that can only be seen by one eye or the other depending on the filter. This helps doctors determine when suppression occurs and teaches patients how to control it.

Finally, Chalen’s first real progress began to surface. Six months into therapy, Chalen noted the world looked “bigger, brighter and clearer” than before. Her mother also noticed that she wasn’t tripping on stairs as much.

Graduation From Therapy and Post-Therapy Life

After one year and 48 therapy sessions, Chalen graduated from vision therapy. Doctors noted she had an easier time aligning her eyes and focusing, in addition to having a more accurate perception of space.

Chalen’s family opted for a “functional cure” as opposed to a “total cure,” which may have taken much longer. That means that although Chalen’s vision isn’t perfect (she still doesn’t have normal binocular depth perception), the strides she made dramatically improved her quality of life, making day to day tasks easier.

While therapy took dedication and effort, Julie said it was entirely worth it. She recalled her daughter’s excitement after her final therapy session, when she signified her feat by ringing the therapy center’s graduation bell.

“When she rang that gong bell, you could just see it in her eyes that she had accomplished something huge,” Julie said.

Looking forward, Julie sees a brighter future ahead of her daughter, perhaps literally with Chalen’s improved vision. She urges other parents to visit The Vision Therapy Center to see how it can improve their child’s life.

“I encourage every parent to at least just go for the evaluation and think about it, and then you can discuss,” she said. “Chalen’s brain and eyes work together better and the results are just amazing.”