What was the Real Reason Rosie had Trouble Understanding What She Read?

Rosie, an eighth grader, had always been a hardworking student. But as she got older, schoolwork got more difficult – and the main issue seemed to be reading.

Yes, she could read, but she didn’t seem to be understanding what she was reading. And the advice from teachers – slow down, ask more questions – didn’t seem to improve her comprehension of the materials.

She also was beginning to experience headaches when she did her homework, along with intermittent double vision, though at the time she didn’t quite know how to describe that to others.

Naturally, she began to dislike reading. Sue and Phil, Rosie’s parents, knew they had to find help for her. 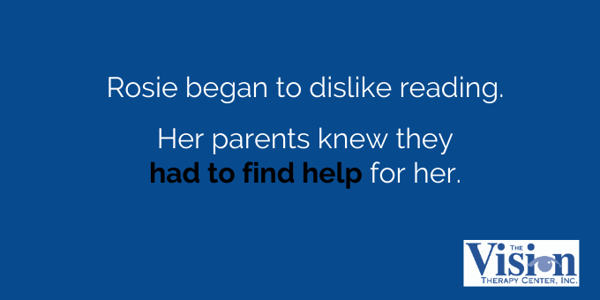 An Appointment at The Vision Therapy Center Identifies the Problem

At the suggestion of a family therapist, Rosie first came to The Vision Therapy Center when she was in seventh grade for a Functional Vision Exam.

Rosie’s exam results indicated that her eyes were working so hard just to focus on the words themselves that it left little room for her to understand them.

It’s a situation Dr. Heather Motisi from The Vision Therapy Center has seen many times. “Rosie had to devote 75 to 80 percent of her effort to the physical act of reading. But that only leaves 20 to 25 percent for memory and comprehension,” she explains.

The visual issues involved more than just seeing the words clearly on the page. They were caused by problems with her Functional Vision Skills. Let’s take a closer look at what that means. 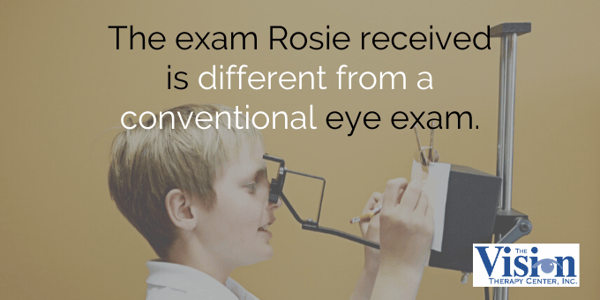 The exam Rosie received is different from a conventional eye exam, which primarily measures visual acuity, or 20/20 eyesight. Functional vision is how your entire visual system – the eyes, the brain, the visual pathways – work together to help you interact with your environment.

Rosie’s initial Functional Vision Exam confirmed that she had a pronounced astigmatism in her right eye, a problem that had been diagnosed by an optometrist way back when she was in first grade. In fact, Rosie had been prescribed glasses for this.

But, as Dr. Motisi explains, Rosie didn’t like wearing glasses. Unfortunately, that led her to rely heavily on her left eye for many activities, like reading, homework, and sports.

But with convergence insufficiency, a person may be unable to maintain focus on an object as it comes closer to their eyes – i.e., it’s difficult for their eyes to converge.

And if your eyes don’t converge efficiently, it can adversely affect the ability to concentrate on otherwise simple tasks. This can result in visual discomfort, headaches, and even double vision – things Rosie sometimes experienced – when performing near-point activities like reading.

Irregular saccades. Saccades is a visual skill that enables a person to make quick eye movements from one object to another. When watching a tennis match, for example, saccadic movements allow you to follow the ball from one player to the other. Irregular saccades make that more challenging.

For Rosie, this problem likely affected her ability to perform certain athletic activities like softball. In fact, she earned the nickname “Two-Strikes Rosie,” recalls her dad, because she so often would have two strikes before ultimately hitting the ball. “We later realized it took her a couple of pitches to figure out where the ball was.”

Accommodative insufficiency. The technical term for the eyes’ ability to focus is called accommodation. Tiny muscles inside your eyes contract or relax to change the shape of your eyes’ lenses and allow you to bring objects at different distances into focus.

Rosie’s mom and dad were surprised by the results, especially the double vision. But they were also relieved. With the problems now diagnosed, there was hope: Functional vision problems can often be helped with optometric vision therapy.

In Rosie’s case, she began 36 weeks of weekly in-office optometric vision therapy, which involved a series of activities designed to retrain her visual system. Over this period, she also completed daily at-home vision exercises to support her progress. 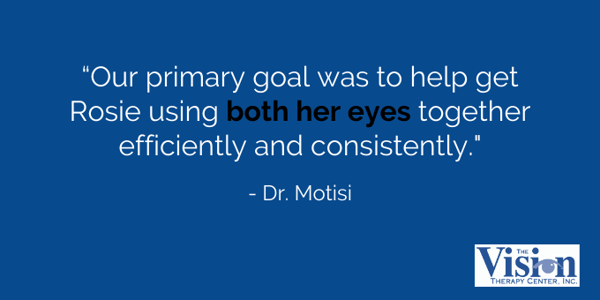 Rosie says the daily exercises were tough, but seeing the staff at The Vision Therapy Center each week made the process better. “I really liked Dr. Mo [Motisi] and the other people that helped me there,” she says.

In addition, Dr. Motisi says getting Rosie to wear contacts also helped. “Contacts can sometimes be a better route for the kind of visual problems that Rosie had because the images that each eye sends to the brain are more equal in size.”

Signs That Vision Therapy was Working

“Many of the visual exercises were timed,” recalls her dad. “Each week, Rosie was able to complete them faster, which was a key sign of progress.”

Her mom remembers how Rosie would usually gravitate toward very simplistic graphic novels. But that began to change. “We ‘caught’ her reading chapter books,” she says.

And when her teachers would write on the board, Rosie says she started to follow what they were saying much better, rather than working so hard just to read what they'd written.

Vision Therapy was ‘So Worth It’: Better Homework Habits PLUS No More Headaches or Double Vision

Today, Rosie is throwing, catching, and hitting the softball better than ever. “I can see the ball coming now,” she says. And her mom happily reports that her reading speed and comprehension “just skyrocketed from when she was first tested.”

Perhaps even more important, Rosie is now able to do her homework much more efficiently.

“In the past, the homework that was reading-heavy was just so grueling for her,” says her dad. “She’s now better able to read information on her own and comprehend it because her eyes now do what they’re supposed to do. She’s not reluctant to just sit down with the book, do the reading, answer the questions, and be done with it.”

On top of all those improvements, her headaches and double vision have vanished.

Rosie's parents are obviously happy about the results of her vision therapy. But they can’t help but wonder about other children who may have issues similar to Rosie’s.

In this section, we share some of Rosie’s diagnoses and clinical progress for fellow optometrists and medical practitioners.