Not ADD: How One Family Overcame the Struggles of Two Children 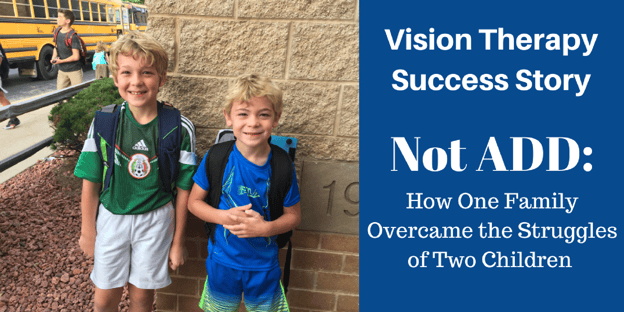 Dealing with a child’s functional vision problem and how it affects their school and play is difficult enough. It’s twice as stressful when you have two children with a problem. The Kugler family showed us they could do it, questioning an initial ADD diagnosis and using vision therapy to overcome their sons’ difficulties in school.

Brody and Easton Kugler were like any normal kids. At least, they were until school began. It was in the classroom that their mother Brenda first noticed an issue.

According to Brody’s kindergarten teacher, Brody would tend to “zone out” during class. “The teacher would have to repeat 2- or 3-step directions to him,” Brenda said. “He was very social and easily distracted.” It was to be the first of many symptoms she would observe -- issues which grew increasingly worse.

Brody, the oldest of the two boys, continued to experience attention/focus issues in first and second grade. In second grade, the idea of medicating Brody for ADD was discussed.

“I thought it was strange because he wasn’t like that at home,” she said. “It didn’t make sense. I didn’t want to put him on drugs when it was an issue I wasn’t seeing. But I didn’t want him to miss out on important classroom instructions either.” 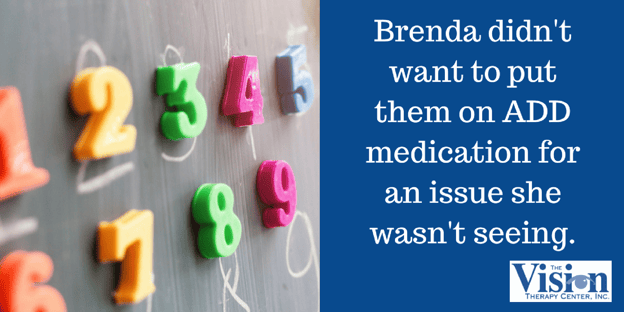 In the classroom, Brody was doing well in subjects like math and science, but his reading problems continued.  He was at the bottom of the class for reading ability. He read each word individually, like it was a grocery list.

“It was like there was no fluency or punctuation,” Brenda said.

“It was miserable trying to get him to read,” Brenda said. “I would spend 10 minutes with him to get him to read two lines. He would cry if a page had more than two or three lines on it and tell me, ‘I hate reading!’ The summer between first and second grade was the toughest.”

The issue reached a head when Brody entered second grade. Right after school started, a standardized test was administered.  To the Kugler’s dismay, they found that Brody’s test scores came in lower than in first grade. 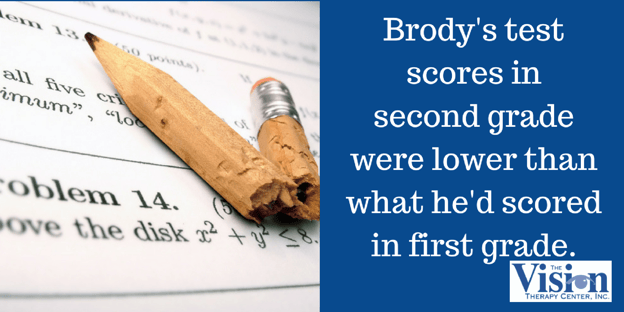 The Kuglers immediately took Brody to an eye doctor who made a diagnosis of convergence insufficiency. She recommended trying pencil push-ups for 3 months (which ended up producing no improvements).

She also mentioned a place called The Vision Therapy Center, but said it would be very expensive and time-consuming. So the Kuglers continued to do pencil push-ups with Brody for a few more months.

At that time, Brody’s younger brother Easton had just entered kindergarten. A bright boy like Brody, Easton did well in school. However, Brenda was beginning to see he was struggling, too.

“When he did flash cards, he could read 80 plus words easily, but when he would look at a book with a one line sentence he would freeze,” she said. “It was like he didn’t know the words.” 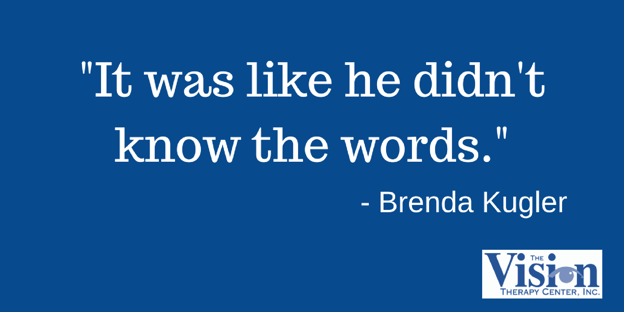 Around spring break, Brenda decided that Brody was falling further behind in his reading level and that pencil push-ups were not helping at all. Easton seemed to be heading in the same direction as his brother.

She decided to pursue a functional vision exam at The Vision Therapy Center.  The results were not surprising: Both boys had convergence insufficiency.

20/20 Eyesight, but There is a Vision Problem

Convergence insufficiency is the result of poor development of eye teaming skills. When it’s time to read, the child cannot converge his eyes to a single point. As a result, double vision may occur.

Eye teaming problems occur when an individual does not aim the eyes at the same point in space, particularly when viewing a near target, like a book. It’s part of a larger body of vision problems called “functional vision problems.”

Functional vision problems are different than issues with eyesight. 20/20 is a measurement of your eyesight, or ability to see clearly at a distance. Functional visual skills include eye focusing, eye tracking and eye teaming.

The diagnosis determined, the Kuglers embarked on the next step: Vision therapy.

To improve their functional vision, both boys began a program of optometric vision therapy to help them develop the necessary visual skills for success in school. 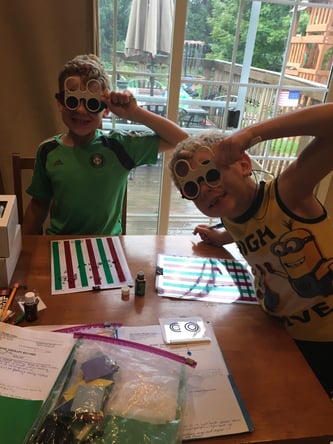 The Kugler boys both had significant problems with convergence, and sometimes vision therapy can be difficult as it requires time from both the parents and the children.

Brenda said a key part to making it through the therapy was the work done by The Vision Therapy Center’s doctors. Dr. Brandon Begotka and Dr. Heather Navarro “couldn’t have been better matched personality-wise” to her children.

Bonding With the Brothers (and Mom Too!)

Dr. Navarro helped Easton with his self esteem when he would encounter challenging new exercises. “She was so encouraging to him and he really loved working with her,” Brenda said. 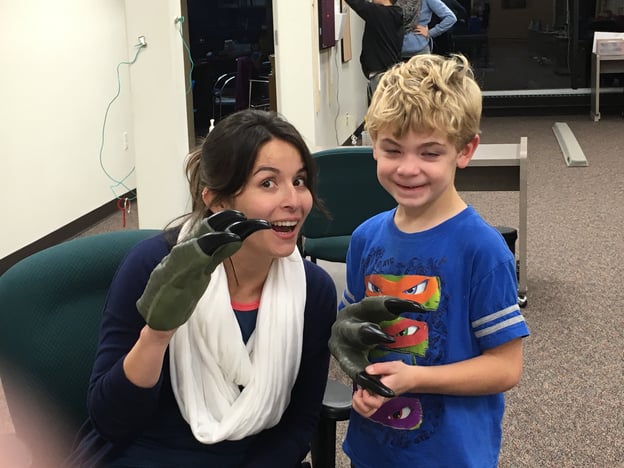 Dr. Begotka was wonderful with Brody. He was also very patient and encouraging, and bonded with Brody. The brothers really enjoyed their therapy sessions and did extremely well with their exercises at home. 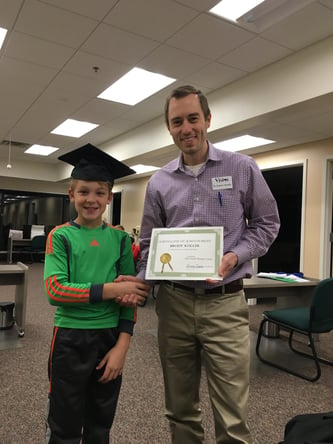 One other thing that Brenda really appreciated was that Dr. Begotka took extra time on a few occasions to talk Brenda off “a number of ledges of panic.”

“The teachers were hoping/expecting to see great improvements quickly but expressed that they were not,” she said. “This put me into a panic because I was worried the therapy wasn’t working.”

Dr. Begotka assured her there would not be large improvements while the boys were in therapy, and progress would be measured after its completion.

“Every child develops differently and they aren't always ready to use what they've learned in vision therapy right away,” Dr. Begotka said. “With Brody, I was seeing signs in therapy and his progress exams that he was setting the stage for success even if it wasn't happening just yet.”

“Tons of Improvement” but Need to go Back to the Beginning

The Kugler boys have recently completed their vision therapy, and Brenda sees them both reading “so much better.” The boys now enjoy reading, and their comprehension has increased by leaps and bounds.

There is still some work that needs to be done. Brody, for example, is missing some of the early reading decoding skills. Dr. Begotka attributes this largely to the fact that the lessons most children learn at a very early age were not registering with Brody because of his vision impairments.

“He couldn’t understand what a silent E was because he couldn’t see the word,” Brenda said. 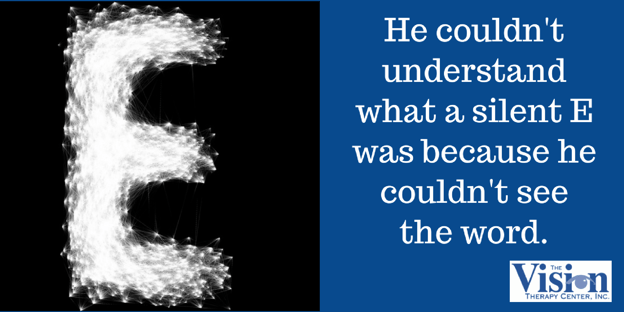 Dr. Begotka explained that when therapy was completed, Brody would need someone to help him fill in the gaps in his reading skills because his vision problems prevented him from learning the lessons the first time around.

The Kuglers have since hired a tutor to start back at square one with reading skills. “This should be a quick relearning since he has already heard it once,” Brenda said.

Easton experienced vision therapy success as well, but his biggest triumph (probably because of his very young age) occurred outside of the classroom.

At the age of 4, older brother Brody learned to ride a bike without training wheels. When Easton started bike riding, he would tilt from one training wheel to the other. He had no sense of balance.

At the age of 6, Easton’s training wheels were removed, but he could not ride the bike without them. He would look at the front wheel and swerve from left to right.  “We couldn’t understand why he couldn’t just go straight.” Brenda recalled.

Easton had problems with orientation and depth perception -- he couldn’t tell where he was in space. Today, however, he rides his bike without difficulty. “The difference-maker was the vision therapy,” Brenda said.

Teachers Proving to be Very Accommodating

Brenda is appreciative of the way the boys’ teachers have become accommodating, and willing to learn about the impact vision can have on education.

The Vision Therapy Center’s Kim Jelinske visited the school and gave a presentation on functional vision problems.  Not only did Brody’s and Easton’s classroom teachers attend, but also all of their teachers. “Even the principal, computer teacher, guidance counselor, and the librarian were there,” Brenda said.

The teachers have been very accommodating. They read Brody story problems in math to avoid any confusion. The Kuglers know they are fortunate to have such good support!