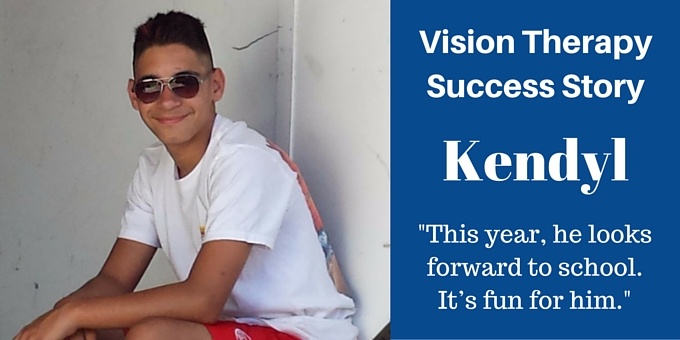 When you read about Kendyl Hughes, you have to scratch your head and wonder why.  Why do we always look to medicate a child at the first sign of Attention Deficit Disorder? As Kendyl and his vision therapy success prove, vision issues should be considered first.

At first glance, Kendyl fits the bill for Attention Deficit Disorder (ADD). According to his mom, Kari, since kindergarten he’s had a hard time staying focused and paying attention to detail. He was diagnosed with ADD, and placed on medication.

Yet things only got worse as time progressed, as challenging schoolwork got even harder.  “His handwriting was atrocious,” Kari said.

Kendyl’s dad heard about a friend’s child who had vision therapy, and so the family took the online Vision Quiz. The score indicated Kendyl had the symptoms of a vision problem, and so the family decided to bring him in for an exam.

“We had nothing to lose,” Kari said.

Much to Gain: Kendyl’s Need for Vision Therapy 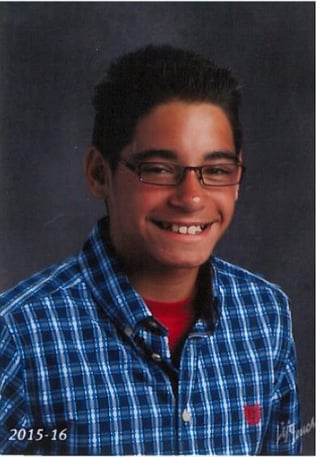 After receiving a functional vision test, developmental optometrist Dr. Kellye Knueppel diagnosed Kendyl with Convergence Insufficiency. The first course of action was a special prescription for glasses to help improve his functional vision.

Kendyl had been told he was a borderline candidate for glasses in the past, but that recommendation was not based on his functional vision.

Functional vision is a set of learned and developed visual skills. It’s how you use your eyes, brain and visual pathways to make sense of the world around you. For example, your eyes focus on a single point in space - say a football - and then your brain combines the two images from each eye. You can now see the football in 3D.

Functional vision also involves following a line of text across a page when you’re reading. It has to do with depth perception, eye teaming, and a host of other visual skills - most of which are not detected by typical eyesight screenings.

At the time of his diagnosis, Kendyl had just started the 5th grade, but he was reading at the level of a 4-year-old. After Kendyl received his glasses, things changed dramatically.  “He did a 180-degree change from that alone,” Kari said.

He told his mother that when he wrote, he never used to be able to see lines on the paper. “That fixed a lot of the handwriting problems,” Kari said.

The family began vision therapy, which uses a series of vision activities and optical devices to retrain the visual system. Kendyl did vision therapy 6 days a week at home, then visited The Vision Therapy Center once a week.

“We were committed to the process,” Kari said. “Even though it was frustrating early on.” 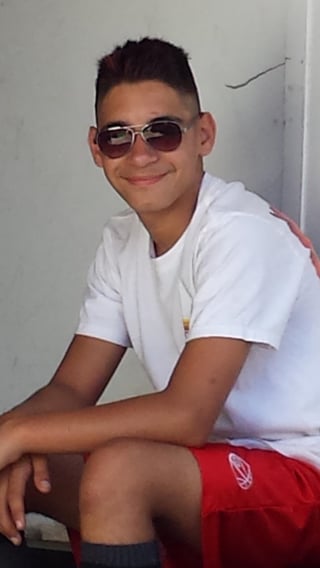 Soon the family saw success. “You could see his confidence improve,” Kari said. Kendyl made honor roll for the first time. He stood up in front of an entire gymnasium and spoke at a school concert - something he never would have done in the past.

“He is much more confident, much more outgoing,” Kari said.

Beyond the self-confidence, the results were astounding.  When Kendyl graduated from vision therapy, he had accelerated seven years’ worth of reading levels in just one year.  “This year, he looks forward to school. It’s fun for him,” Kari said.

In his two hardest subjects - math and language arts - Kendyl is getting an A and a B, respectively.  His reading and comprehension have dramatically improved. “He enjoys picking up a book,” Kari said.

Doctor Who Diagnosed Happy for Kendyl

Eventually, Kari told the doctor who diagnosed Kendyl with ADD of the dramatic success vision therapy had produced.  The doctor, who had been initially skeptical, was happy for his success, and for the fact that Kendyl was no longer on medication.

It’s a perfect example of why vision should always be considered before medicating a child for ADD or ADHD. We’ve always held the position that children might very well have these conditions, but if it turns out the issue is a vision problem, then medication may be avoided entirely.