Grades a Focus of International Children’s Vision and Learning Month 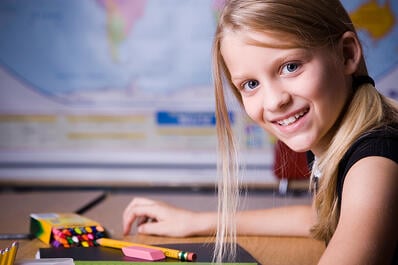 Every parent fears a report card filled with bad grades.  It’s why we push our kids to study harder, work longer, and put in a ton of effort to improve their scores. So why don’t we reciprocate and make sure functional vision problems aren’t the source of bad grades?

Our society relies heavily on a child’s grades in school as a means to evaluate their performance and their potential. You can argue whether or not that’s a valid benchmark, but it’s one of the few quantitative assessments we have of educational performance.

If your child brings home one of those not-so-great report cards, what do you do?  You’ll probably urge them to study more. You may work with them personally, or hire a tutor.  Heck, you may even go to such outrageous lengths as taking their cell phone away.

But before you embark on those tried and true methods, you may want to start with a problem often overlooked with struggling students: They have a functional vision problem.

Functional vision problems are so unknown to most parents and educators that the College of Optometrists in Vision Development (COVD) has once again declared August to be International Children’s Vision and Learning Month.

(See how Wisconsin supports Children’s Vision and Learning Month - visit our Facebook page to see all the Wisconsin cities that have issued proclamations about this special month!) 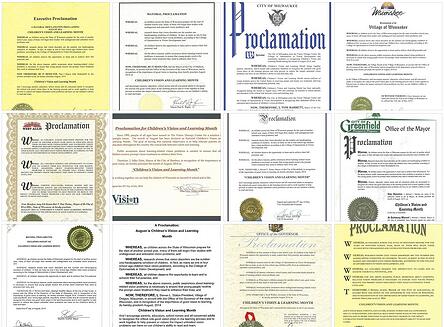 Reading Critical for the Core

This year, the COVD has taken a very timely approach in their publicity about this special month.  They’ve wisely pointed out that not only do vision problems impact grades, but they could also adversely affect a student’s ability to perform within the Common Core Curriculum.

The Common Core will rely heavily on reading skills, as the creators of the curriculum have clearly stated: “Students will be challenged and asked questions that push them to refer back to what they’ve read.”

Functional vision problems could undermine that performance.  According to Ida Chung, OD, FCOVD, and President of the COVD, “students who have eye coordination and eye movement problems struggle to read and have trouble remembering what they read, which will make this task nearly impossible.”

There has been so much emphasis on rolling out the new Common Core Curriculum, but I have to wonder if we’re putting the cart before the horse.

Sure, setting reading standards is great, but what good are they if kids can’t read?  Particularly, 25 percent of the student population, according to the American Optometric Association, has a vision problem!


You Can’t Read if Your Vision Doesn’t Work

I have to draw a sports analogy to an event that occurred during this year’s NBA Finals as an example of how off-base this thinking truly is.

In Game 1 of the Finals Series between the Miami Heat and the San Antonio Spurs, the Heat’s LeBron James suffered from muscle cramps.  Despite his best efforts, one of the best basketball players on the planet was physically unable to get back in the game.

James’ body simply wouldn’t allow him to play.  Yet he drew criticism from the media and fans for not fighting through the injury.

It involves seeing an object clearly in space.  It involves the ability to track a line of print on a page, to follow a ball flying through the air, or to copy something from the teacher’s chalk or smart board.  It requires your eyes to work together to achieve binocular vision, otherwise you can’t see in 3D.

So what happens if your functional vision is impaired?  When it comes to learning, a child might find themselves in the same boat as LeBron James.

That child may be physically unable to read a book without experiencing headaches.  Or he or she could find it difficult to concentrate for long periods of time because of fatigued eyes.  Bad behavior can also be experienced due to feeling like they’re stupid and falling behind their peers.

What can be done to help struggling students who have a functional vision problem?

With LeBron James, his muscle cramps were easy to detect.  For children with functional vision problems, the issue is different.

In these cases, the kids don’t even know they have a vision problem because they have no frame of reference.  They don’t know what the world looks like through a properly functioning visual system because they’ve never had one.

It’s then up to the parents and the adults to be on the lookout for vision problems. The first step is to download the Vision and Learning Guide at the end of this post and familiarize yourself with the symptoms.

Or, if you think your child is suffering from a functional vision problem, click on the button on the side of the page and take the Vision Quiz.

Finally, help us spread the word about International Children’s Vision and Learning Month.  Share this post on your Facebook page, tweet it out, or email it to friends.  We need to let the world know about functional vision problems -- this month, and every month forward.