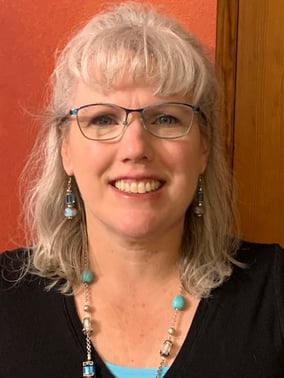 For as back as she can remember, Deb Holtan had always struggled with reading. “It bothered my eyes, and I would get headaches. I was slow at it and had really poor comprehension of what I read.” Her challenges were so serious that she repeated fourth grade.

Yet whenever Deb would have her eyes examined, she consistently had 20/20 vision. So what was the problem? Little did Deb or her parents know that her struggles were actually signs of a functional vision problem.

In fact, it would take several decades before Deb was actually diagnosed. In the meantime, she managed to make it through school and college, finding strategies to work around her reading struggles and leveraging her strengths, like “directing people on how to do things,” as she describes it.

Ironically enough, at one point she found herself working at an optometrist’s office.

A Discovery Leads to a Life-Altering Path

On a flight to an optometry conference, Deb was about to take notes while talking with her boss, optometrist Dr. Dan Everts from Advanced Family Eyecare. She explained to him that she had to position herself so she could look directly at him—otherwise, she would be nauseous.

Dr. Everts was in the early stages of incorporating optometric vision therapy into his services. He suggested that he perform a Functional Vision Exam on her when they got back to the office.

Functional vision is how your entire visual system — the eyes, the brain, the visual pathways — works together to help you interact with your environment.

The moment would be a turning point for Deb’s vision problems and her life in general.

Dr. Everts discovered that Deb had several functional vision problems that had gone undetected. For example, her eyes didn’t work well together as a team, which made visual activities like reading extremely difficult.

Deb’s eyes had to work so hard just to focus on the words themselves that it left little room for her to understand them. And the added stress on her visual system also caused her headaches.

On top of that, Dr. Everts confirmed that she had poor peripheral vision, which explained Deb’s critical need to look directly at people when conversing. It also explained why she was so often startled by things like a car “suddenly” pulling up next to her when driving. Objects came into her field of vision much later than a person with normal vision.

Having her functional vision problems diagnosed was crucial because they can be helped with optometric vision therapy. (More on that below.)

Why Had Deb’s Vision Problems Been Missed?

The eye exams Deb had received as a child and well into adulthood consistently missed her functional vision problems.

It’s unfortunate but not that surprising. School vision screenings and conventional eye exams typically only evaluate visual acuity, or 20/20 eyesight. This is a measure of visual clarity and is tested by having a child read lines of letters on an eye chart.

Although an important measure, a test like this doesn’t require—or evaluate—the types of eye movements that, for example, are used when a child reads or writes. This is precisely why a Functional Vision Exam is actually crucial for any child.

Deb recalls, “Doing the exercises made my head feel funny. They weren’t easy. But once I started to understand that they were helping my visual system, I learned to work through the struggle.”

Around the six-week mark, Deb began to notice a shift in her reading skills. “There was less of a panicky feeling when I looked at the words.” And by the end of her six months of vision therapy, she was on her way to a new life.

Although her vision therapy was more than a decade ago, Deb doesn’t hesitate to say that it changed her life. Yes, her reading speed increased, her comprehension improved profoundly, and her headaches all but disappeared.

But perhaps more importantly, Deb says she felt like she had the potential to do more, and vision therapy gave her confidence to take on challenges. 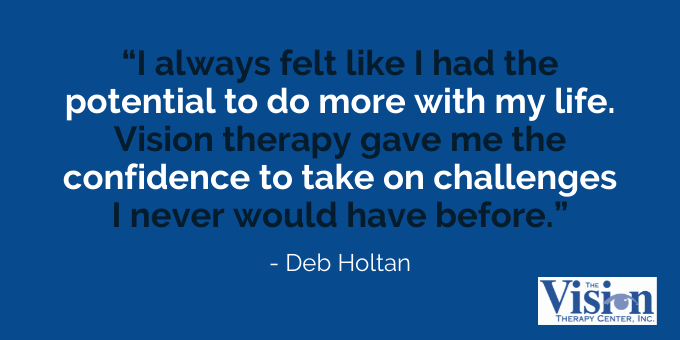 And that includes leadership roles. For example, Deb was Executive Director of the Medical Center Foundation of Hartford, a community-based nonprofit where she helped people find support for a wide range of health and wellness needs. Today she is Philanthropy Manager at Cedar Community, a faith-based, nonprofit senior living community.

Deb’s Message to Others

If you think you or your child could have a functional vision problem, Deb says, “Don’t hesitate to reach out and get help.”

“The key is getting the problem diagnosed,” she adds. “I’m living proof that you can go from struggling with reading to embracing the joy that reading and learning can bring. And where you go from there, well, that's really the exciting part.”