This is the first in an ongoing series of posts in which we’ll follow a patient through vision therapy. In this first post, we describe Madilyn’s vision problem, and the immediate impact some corrective measures have had on her life.

Madilyn’s parents had high hopes for her when she entered kindergarten. A bright kid and an early reader, they thought she would thrive - but instead she struggled. They would soon learn that Madilyn had a functional vision problem, and that life for their daughter was about to improve.

Flashback to the days before kindergarten, when young Madilyn was getting ready for her first day. “We thought she would take to school like a duck to water,” said her mom, Angie.

Madilyn had always been a bright kid. She’d started reading around the age of 4, and her parents believed she would flourish in school. Yet from kindergarten to first grade, Madilyn endured significant struggles.

It took her a long time to complete work. Her reading was slow, and in math, she struggled to memorize facts. Her seat was moved closer to the board to help her see better, but as she told her mother, “I know the board is closer, but it feels further away.”

Madilyn was tested for ADD, but her tests came back negative. “They ruled out ADD because she could read ok at home,” Angie said. “No one could figure it out.”

A Persistent Mom and the Vision Quiz Help Unravel the Mystery 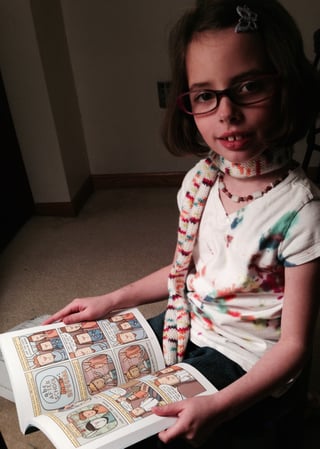 The family switched schools, as Madilyn’s problems continued to worsen. Her new teacher saw what Madilyn’s mom saw - a bright girl who was struggling for inexplicable reasons. “She wanted to get to the bottom of it,” Angie said.

Searching for answers, Angie reached out to a mom’s group on Facebook. She received two suggestions as to the cause of Madilyn’s struggles: The first was she should check with a chiropractor (Madilyn did have a compression in her spine that was affecting her optic nerve).

The second was that she should get a functional vision exam from a developmental optometrist. Angie visited The Vision Therapy Center’s website and took the Vision Quiz. A score over 20 indicates a problem: Madilyn scored a 45.

Angie circled back to Madilyn’s teacher, and asked her to take the Vision Quiz for Madilyn. The score was 30.

As a former social worker with a background in brain injuries, Angie started to think about the possibility that her daughter’s binocular vision might be affected. She took Madilyn to The Vision Therapy Center.

After undergoing a functional vision exam, Madilyn was diagnosed with:

Angie’s hunch was right. It was a vision problem.

Madilyn is in the second grade. At the end of October 2015, Madilyn’s reading level had tested out at 1.5 - the level of a first grader in the fifth month of school. She was retested in November of 2015 after receiving the glasses and undergoing syntonics treatment: Her score improved to 2.6.

“Her handwriting, self-confidence and reading have improved,” Angie noted.

More importantly, Madilyn is aware of the cause of her struggles. “She has a vocabulary for this,” Angie said. “She didn’t realize before that she was seeing double. Now she does. She can say when she needs a break.” 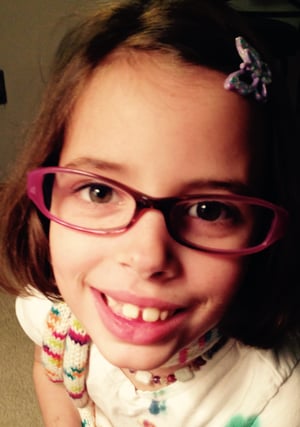 We’ll check in with Madilyn down the road to see how her treatment is progressing. We’re looking forward to more amazing progress!