Basketball Shows Us How to Treat a Lazy Eye 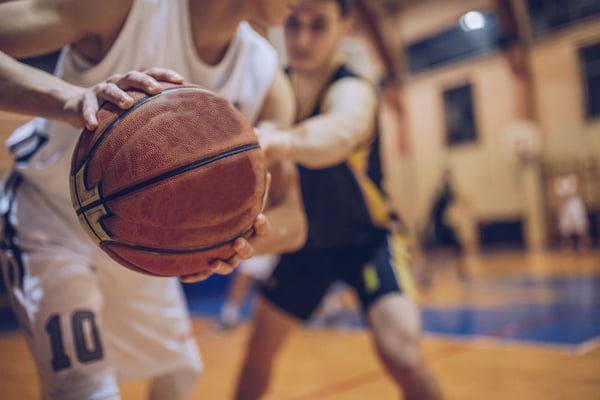 The medical community has its opinions about how to treat a lazy eye.  But we think basketball actually holds the secret to helping us understand the proper way to treat amblyopia, otherwise known as lazy eye.Before we get to the lesson basketball can teach us about amblyopia, let’s compare the differences between the sport and the eye condition.

Basketball is one of the most popular sports on the planet.  According to FIBA, the world governing body of basketball, 11% of the world plays basketball.  Over 450 million people play basketball on competition and grassroots levels.

Amblyopia is a relatively unknown visual condition.  According to the American Optometric Association, 2 to 4 percent of children have amblyopia.

Basketball players are easy to notice.  They generally have a ball, a basket, and make a lot of dribbling noise.  If they’re particularly good at it, they may also be playing in an arena with 20,000 people, and being watched by millions on TV.

Amblyopia isn’t quite so easy to spot. The truth is, most parents don’t even know their kids have it. That’s because there may be no distinguishing feature, such as an eye turn.  (That’s a condition called strabismus and involves an eye turn of some sort, such as a crossed eye).

Amblyopia occurs when one of the eyes does not see as clearly as the other.  This can be caused by a number of factors, the most common being an eye turn (strabismus) or anisometropia (a large difference in prescription between the two eyes).  When the two eyes are significantly different, the brain stops paying attention to information in the non-preferred eye, which is usually the eye that is turned and/or has a significantly higher prescription.

There is some irony in the name “lazy eye,” as the amblyopic eye does not receive as much “work” by its own accord.  Because it’s out of alignment with the other eye, the overall visual system essentially shuts down the signal.  Kind of like a coach benching a player.

When the brain is only receiving images and a signal from one eye, it lacks binocular vision.  That affects a child’s depth perception, among other things, and can lead to a variety of ambiguous symptoms:  Headaches, poor study habits, clumsiness.

You can’t really “see” amblyopia, although people with strabismus may have amblyopia, too.  This can be particularly frustrating to a parent, because unless you’re familiar with amblyopia, you probably have no idea why your child is performing poorly in school.

And here’s where we get to the similarities between basketball and lazy eye.  If someone is bad at basketball, they get better the same way a child with amblyopia does:  By improving their skills, and learning to work with the team.  Let’s explore that a little further.

Patching Alone Not the Answer

A common approach to treating lazy eye is patching.  The philosophy by doctors who prescribe patching alone is “Let’s get the ‘lazy eye’ to start working again.”  By making it work, and shutting off the signal from the other eye, the amblyopic eye will become stronger and return the visual system to its normal function.

However, success from patching may be short-lived.  The weaker eye may eventually see clearly, but that doesn’t guarantee that the eyes are going to start working in tandem.  For that to truly happen, the visual system must be retrained to establish efficient binocular vision.

Now consider the basketball player who is struggling at the game due to poor passing and shooting skills.  The coach instructs the player to practice on his own for two hours a night.  After two months of developing his skills, the player returns to the team.  The coach is confident in his player’s improvement, and so he inserts him into the starting lineup of the next game.

Unfortunately, the result is not good.  The player flops.  He fails to score.  He looks out of sorts with his other teammates, and his timing is off.

The coach’s mistake?  Even though he improved the player’s skills, he never improved his ability to work as part of the team. 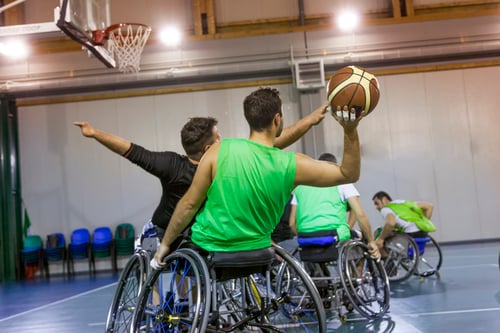 Basketball is a sport that requires all members on the floor to work together as one to be truly successful.  Vision is no different.  Both eyes must work in tandem, along with the rest of the visual pathways and the brain, for a child to overcome amblyopia.

What if the basketball player worked on his passing and shooting skills on his own, and practiced with the team?  Wouldn’t he improve his personal and team skills at the same time?  Of course he would.

The same is true for amblyopia.  As we’ve indicated on many previous posts, the most effective treatment for amblyopia is a combination of patching and vision therapy, which uses visual activities to improve binocular function.

I’ve touched on the tip of the amblyopic iceberg here, but I think the basketball analogy is probably the easiest one to think of when it comes to the relatively unknown condition of amblyopia.  And just like in basketball, when you play as a team, you’re going to win.