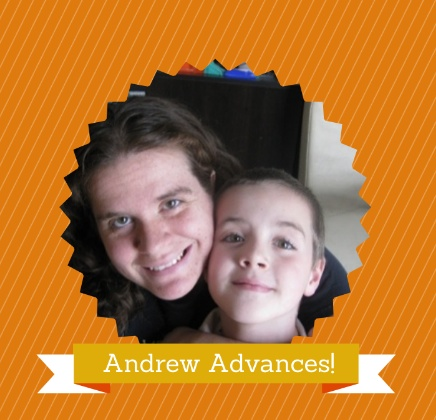 A success story from Angela, a client of The Vision Therapy Center.  Her son Andrew suffered from a convergence insufficiency.

My son, Andrew, had been diagnosed with ADHD in the spring of 2010.   It was during a routine exam with his optometrist that summer that he indicated to me that Andrew had "poor visual focus."  He referred me to The Vision Therapy Center, Inc. to see if they could help him out.

I was a little concerned with getting involved in yet another type of therapy, as my son had been taking part in many types of developmental therapies since he was a toddler.  But, I decided to give them a call and find out what the process would be.

I do not recall with whom I spoke, but the person was very nice and explained the process to me in depth.  I decided to get him tested, to see if he actually had a problem.

After the first two initial exams, I went in for the parent-only explanation meeting.   They told me that he had ocular motor dysfunction (his eyes would not move side to side together) and convergence insufficiency (he had trouble seeing a single image).   Based on the seriousness of these two issues, I decided to start him on vision therapy.

The biggest initial issue, of course, was money.  The Vision Therapy Center was very upfront about insurance likely not covering it.  My son has group insurance through his father, and it did not cover ANY of the therapy.  I had to take out a loan to be able to pay for it.

As my son is a first-grader, I made the decision to have his therapy sessions early in the morning.  This was mainly because I felt he would be too worn out after having gone through an entire day of school to be able to focus or behave for a therapy session.

However, the hardest thing about Vision Therapy was NOT the weekly sessions.  In fact, I looked forward to them as I looked at it as my one day “off,” where I did not have to do the therapy with him at home.

The hardest thing was by far keeping up the therapy over the course of the week.  He almost always complained about doing the therapy.  It’s not like the weekly exercises were always hard.  They started with easy activities, and built upon them, never really giving him anything that was too hard for him, but moving on to the next activity once he mastered the previous one.   He simply did not like having to take the time out from playing to do the therapy.

But, together we persevered, and by the time he graduated in April of 2011, he was at or above age-level in all of tests that they performed.  When he had begun, he was below age-level in almost all of them.

The biggest advantage to his improvement in vision was his advancement in reading.  His convergence insufficiency in particular made it hard for him to be able to see the words that he was trying to read, so reading had been a struggle for him.  Now, he is at age-level in reading as well!

In summary, I would say that Vision Therapy was very rewarding for my child.  He did not always like doing it, but the improvement that he achieved was significant and that far outweighs the effort that we put into it.

The therapists, doctors and receptionists were all awesome! Everyone there treated us well.  Even when he was struggling or having an off-day, they were always respectful and understanding.   I am very proud of my son for his achievements and I have The Vision Therapy Center to thank!

This is a success story submitted directly from a client of The Vision Therapy Center.  This is a testimonial, and the person submitting the story was not compensated in any way for their contribution.