From “Seeing Blobs” to Straight A Grades with Vision Therapy 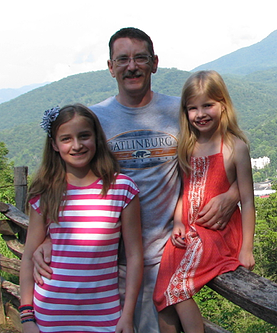 The following Vision Therapy Success Story comes to us from Dale and Kari.  Their daughter Paige (sitting on fence in photo with her dad and older sister) at one time could not read questions on a piece of paper held inches from her face.  Read Kari’s first-hand account of their vision therapy story!

We became aware of Paige’s symptoms back in January of 2012 (even though her condition was always present).  She was always a very energetic child, but we were becoming concerned that she was displaying some hyperactivity.  She would come home from school bursting with energy – often running in circles in the living room (as she did when she was a toddler).

In addition, her eyes were often irritated, very red and watery.  We thought it may be allergies or a cold.  Things took a turn for the worst with all the reading and, “close-up” work needed in first grade.  She was an excellent student and a top reader in her class, so her condition surprised us.

On January 18, 2012, everything seemed to come to a point where we knew we had to take action immediately.  When I (Kari) picked Paige up from her scout meeting after school, the gym teacher saw me in the hallway and mentioned he was concerned about Paige’s vision in gym class that day.  She had told him she was, “seeing blobs” (a 7-year-old’s interpretation!) and seeing double.  While waiting in line to pick her up from scouts, I discussed my concerns with a good friend and parent.  She was the one that told us about Dr. Kneuppel’s success with vision therapy.  We never knew what a blessing that referral would become!

After the scout meeting, we called the pediatrician immediately and were able to get an appointment that evening.  We wanted to rule out any physical condition that would cause the double vision.  They performed a standard vision test and an appropriate physical examination.  She tested near 20/20 vision and was in good health.

When we came home from the doctor that very evening, we received a call from her first grade teacher stating her concerns as well.  She mentioned she asked Paige to answer a question on a piece of paper she was holding (only inches from her face), and Paige responded back to her that she could not read it.

We had to have an explanation for her vision issues.  We called The Vision Therapy Center the next day. Paige’s condition and life was about to change.

Dr. Kneuppel and the staff at The Vision Therapy Center were very caring and explained Paige’s condition and treatment to us thoroughly and in a way we could understand.  They performed numerous tests.

Their knowledge and the advanced equipment they had were amazing.  They even had glasses with lenses that we could put on to “mimic” what Paige’s double vision was like (at a much “lower” level at what Paige was actually seeing).  I (Kari) had to remove them immediately.  It felt like everything was moving around me.  It brought tears to my eyes, that our child was seeing the world in that way.

To Paige, this was a condition she was born with and didn’t know any different.  It baffled our minds how she could receive such high grades at school with her vision as it was!  That sure explained the watery, agitated eyes, not to mention, the energy she needed to release after a day sitting in her desk looking at schoolwork for most of the day!

We were blessed, however, that she had a teacher who embraced her condition and helped Paige in every way she could throughout the remaining school year.

Paige’s actual diagnosis was, “Convergence Insufficiency” and “Intermittent Exotropia, Alternating".  This diagnosis was reached on February 1, 2012.

Paige began her therapy with 30 sessions of Phototherapy or “Syntonics” (light therapy).  We have to be honest and admit this seemed a bit strange at first.  However, it was all explained to us in great detail and we trusted Dr. Kneuppel.

Paige was very dedicated to her light therapy.  We did our best to make it fun (mostly singing songs together), while she stared at the appropriate colored light in a dark room for a short period of time (usually around 15 minutes/day).

At her first examination with Dr. Kneuppel (after the completion of the light therapy), she had amazing results already!  Her vision had improved dramatically.  She then began her regular, weekly therapy sessions.

She started first with Cindy, who we adored, and then due to a conflict in our schedule, we changed to Shannon for her remaining therapy.  Paige immediately formed a bond with Shannon as well.  She was treated like family and understood and responded well to Shannon’s directions.  Shannon took time after each weekly session to explain to one of us (parents), what Paige’s daily exercises for the next week would be (with a “day off” of her choice!).

This began our approximate 11-month journey and quickly became a routine in our daily home life.  We were blessed with a very conscientious child who rarely complained about doing her daily therapy.  We believe this is mostly due in part to the fact that the exercises were made to be “fun” and basically designed for children.  Paige had some exercises that were her favorite which she looked forward to doing!

During Paige’s treatment, gradual changes were occurring in her vision.  There are two major times in particular we would like to mention.  In June of 2012, we were driving home at night from an out-of-town wedding and out of nowhere, Paige shouted, “Daddy, look at all the stars in the sky!  There are so many!”  It was truly as if she was seeing them for the first time in her life.

Later in fall of 2012, we once again were driving and Paige said in utter amazement, “Look at the leaves on the trees!”  She couldn’t believe all the different colors as well.  We believe she could never see the fine details of everything around her until her vision therapy journey began.

Paige “graduated” from The Vision Therapy Center on February 4, 2013.  She may have not noticed the changes, as they happen gradually through the process, but what a difference it has made now.

She no longer struggles to see the whiteboard in the front of her classroom, she continues to excel at reading (now at a 5th grade level in 2nd grade), maintains her “straight A’s” and most importantly, she only sees “one” of everything and has no vision issues at all!  She is also calmer at home and at school.

As Paige put in her own words, “Vision therapy has changed my life forever!”