Double Trouble – Why a Family Pursued Vision Therapy For Both Daughters 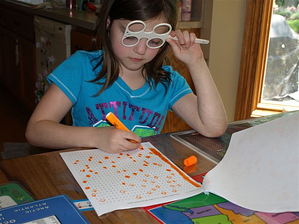 Undergoing vision therapy treatment can be a challenge for any family.  In the case of the Stiverson family, that challenge became twice as difficult as daughters Hope and Hailey both required vision therapy.

Suzanne Stiverson recently shared Hope and Hailey’s story with us.  Like many of our cases, Suzanne and her husband Scott had noticed some rather peculiar issues with their daughter Hope, early in her schooling.

Hope was - and still is - an extremely bright student.  However, her teachers were reluctant to let her advance in school because she struggled in reading.  “She’d skip words, or pull in words from other sentences,” Suzanne recalled.  “I also noticed at home that when she’d watch TV, she'd turn her head and view it out of one eye.”

Concerned with the behaviors, Suzanne took Hope her a local hospital and had her seen by an ophthalmologist.  “She checked out with 20/20 vision, so the doctor told me she was fine,” she said.

When she told the doctor of Hope’s reading struggles, and her tendency to turn her head while watching TV, the doctor said, “It just must be a bad habit.”  Not surprisingly, there was no mention of vision therapy as a solution, or that there was even a problem at all.

Suzanne knew better.  Like many of the parents who find us, she knew something was wrong with her child.  She wouldn’t rest until she found help.

Eventually, Suzanne discovered The Vision Therapy Center, and had Hope undergo a Functional Vision Test.  The results were both encouraging and alarming.  “They told us she was one of the worst cases they’d seen,” Suzanne recalled.  “She had one of the lowest test scores on record.”

The diagnosis for Hope, as would also be the case with Hailey, was difficulty with convergence, accommodation (or focusing) and eye movements. In addition, Hailey had intermittent exotropia. “They both had problems keeping words and numbers single and clear on the page,” said Dr. Brandon Begotka.  “And their inefficient eye movements negatively impacted their performance with school work.”

In Hailey’s case, mom once again noticed peculiar reading behaviors in her daughter.

“I couldn’t figure out why reading wouldn’t click with her,” Suzanne said.  “The school would send home books, and instead of reading it, my daughter would memorize it.”  Hailey would also use her finger to read along on the page, and once stopped to ask her mother how to pronounce the word “the.”

“I asked her to spell it, and she started with ‘h’,” she recalled.

Later, the Stiversons would learn that her eyes were having problems converging, a fact that Suzanne never noticed because her daughter always sat on her lap when being read to.

“When it was her time to read, she hated it,” Suzanne said.  “She used to throw books when we gave them to her.”

The vision problems also affected her in other ways.  Once while playing baseball, a line drive was hit right at her face.  Hailey didn’t move an inch, probably because she couldn’t see the ball.  “A coach stuck out his glove and caught it,” Suzanne said, still breathing a sigh of relief.  “If he hadn’t, her face would have been fractured.”

At first, both girls were excited at the prospect of doing vision therapy.  The visits to The Vision Therapy Center were fun.  However, performing the vision therapy activities at home proved to be more of a challenge. 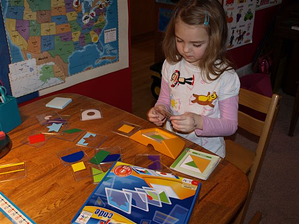 “The hard work is doing the therapy at home,” Suzanne said.  “It’s also when you realize how bad your child really is.  I would try the activities Hope was doing and I was amazed that she had problems doing them.’”

The therapy wasn’t easy for the girls.  The Stiversons used a lot of incentives to keep them going, but it was when their daughters noticed a change that self-motivation took over.

“The first three months were the hardest,” she said.  “Once the headaches went away, they got excited.  They realized there was something to this.  It’s like losing weight.  It takes time.”

The Stiversons now homeschool their children, which has proven to be an ideal part of the therapy process.  “I build vision therapy into the day,” Suzanne explained.  “I have a box with all the vision therapy exercises.  We just incorporate vision activities in our games – even our family games.  The kids don’t even know it’s to improve their vision.”

At first, Suzanne saved vision therapy for the end of the day.  Yet after watching her daughters struggle, she realized vision must take priority.  “I asked Hailey to copy a sentence one day, and when I checked on her progress, she had tears streaming down her face.  Even simple writing would make her sob,” she said. 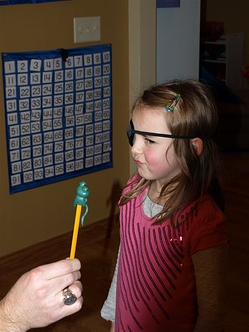 Vision therapy soon became the first activity of the day, when the girls were fresh and rested.  She noted how difficult it must be for kids who are in school full-time to come home and try to do the therapy.

Today, after vision therapy, both Hope and Hailey’s vision has significantly improved.  Neither suffers from headaches, and both have experienced what mom calls, “A whole new world.”

Hope has become a voracious reader, often taking an encyclopedia and flashlight to bed with her.

Hailey is back to reading at grade level.  More importantly, she loves to read.  At a recent trip to Barnes & Noble, she loaded up her arms with new books.  “She used to think she was stupid when she looked at her peers,” Suzanne said.  “Now she’s blossoming.”

Both girls are continuing with a home-based maintenance program to ensure they continue to improve how they use their vision.  The Stiversons believe that vision therapy treatment, albeit expensive and challenging at times, was worth the  work and the cost.

“For a child that needs it, I would encourage it.  In the long run, you are going to be so happy,” Suzanne said.  “What price do you put on your child being able to read correctly?”