Meet Isaac, our latest vision therapy success story.  His mother had brought him to us because he was struggling with reading and sounding out words.  Isaac attends a school with high academic standards, and his teachers were concerned that Isaac wasn’t meeting his potential.

As Isaac’s mom told us at his first appointment, “Isaac does not complete work on time.  He asks for help and takes more time than others in his class.  His reading level is considered low for his school, but good for an average six year old.”

When he came in for his Functional Vision Test, we could see that Isaac was a very intelligent boy. However, in his initial round of testing, it took a long time for him to complete his work.  We found his handwriting extremely neat, although his mother said it was “sloppy” for him.

One of the tests that measured how Isaac used his vision was the Van Orden Star (VO Star) test.   In this test, the patient draws a two-dimensional representation of their perception of three-dimensional space. The resultant drawing gives information about how the patient perceives visual space with each eye.

A picture of an ideal drawing is shown below: 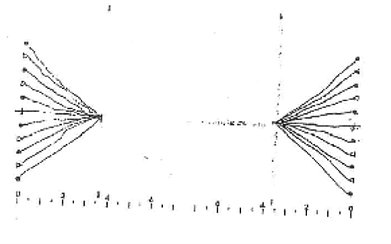 In Isaac’s case, the VO Star that he created before his first Functional Vision Exam revealed large differences in the perception of space by each eye. With such large differences, it’s no wonder why his brain had difficulty using his two eyes together as a team. 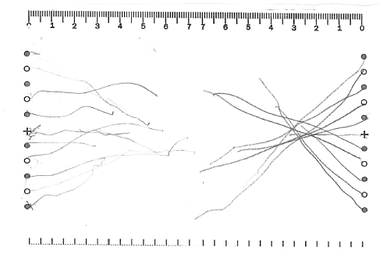 In a test seven months later, we see huge improvement.  The lines are much more evenly spaced and the perception of visual space and the right and left eyes is much more similar. His brain now has a much easier time using the two eyes together as a team. 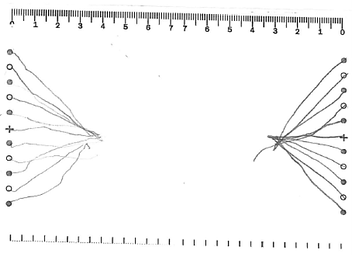 At his first progress exam, we found out Isaac was starting to read chapter books and his mother felt his accuracy in basketball and football had improved.

By the time his final progress exam rolled around, his mother reported, “His reading is more fluid, and he no longer struggles with sounding out every word every time he sees it.  Isaac can copy from the board more efficiently.  He seems more calm and confident.

We found Isaac to be a delightful boy to work with.  He’s now more observant of his space and how he relates to it.  Congratulations to Isaac!