Do We Harm Our Children by Ignoring Harmon and the Slant Board?

It started so innocently.  To increase “Likes” on The Vision Therapy Center’s Facebook site, I was looking for a great giveaway.   I had seen Dr. Kellye Knueppel’s use of the slant board with her patients, and I thought we could have a drawing, and give away a slant board every month to our fans.

(Before I go any further, please note that the monthly giveaway is now live, and you can enter for a free slant board by liking our Facebook page.)

I had seen how Dr. Knueppel and her therapists use the slant board in her office.  However, I had no idea just how profound an impact a slant board can make on a person’s vision, nor how groundbreaking and pivotal was the research behind it – the research of Dr. Darrell Boyd Harmon, creator of “The Harmon Distance.”

“The Harmon Distance” is considered to be optimal visual distance for reading and other close work.  It is measured by placing a closed fist under the chin and then holding a book at the tip of the elbow.  The book should not come any closer.

The Harmon Distance is a common term among developmental optometrists, but it is just the tip of the iceberg in regards to Dr. Harmon, Dr. Knueppel informed me.  Harmon’s “elegant” research, as she puts it, was far-reaching, and still is applicable today.  In fact, it may be even more relevant than ever before.

Why?  Dr. Harmon’s findings are in danger of being forgotten, despite the fact that they’re still applicable.  If we ignore what Dr. Harmon found, many children’s ability to learn may be impaired, and they may even face the risk of long-term harm to their visual system.

Dr.  Harmon’s story was detailed by Sarah Cobb in her article "Harmon Revisited" that appeared in OEP’s Advanced Therapist in 1990.  Her article was the source of much of what you’re about to read.

According to an article by Sarah Cobb, Dr. Harmon had a unique motivation for conducting his research.  Earlier in his life, Dr. Harmon had suffered a severe head and neck injury after a near fatal accident.  He endured a period of blindness, and his head and trunk were permanently out of alignment.

After his recovery, he devoted his life to making a study of the growth processes in children, especially those related to vision and the learning environment.  He became the director of the Division of School Services for the Texas State Department of Health, and in 1938, collaborated with 14 state professional agencies in a nine-year project that included 160,000 children.  The result is Harmon’s seminal work, The Co-Ordinated Classroom.

Harmon spent three years of compiling an inventory of physical and psychological difficulties of Texas school children.  The children were given thorough pediatric, dental and psychological examinations.  Visual, educational, medical and dietary tests were also conducted.

Harmon concluded that “posture relates not only to spatial judgments, but also to performing visual tasks.”  As Dr. Martin Birnbaum notes in his book Optometric Management of Nearpoint Vision Disorders, "to perform any task, a person must come to balance with gravity and then the particular task at hand...(If they don’t), a person must expend energy to perform the task easily and efficiently."

In other words, if your body is out of balance with the environment, it will take energy to compensate.  Harmon wondered what would happen if the children’s environment were improved.  How much impact would this have on their vision and overall performance?

“Heredity supplies the materials of which environment makes the man”

This quote by Dr. Harmon, not exactly PC with its gender-reference, makes a clear point.  He writes, “Eyes are not cameras…meaningful vision is learned – learning like every other learning – by doing, by the constructive use of bodily stress.”

How we interact with the environment can lead to significant impacts on our visual system.  For example:

To solve the problem, Harmon analyzed data from many fields and planned a “coordinated classroom.”   He remodeled classrooms to improve “daylight control, artificial lighting, seating and seating arrangement and room decoration.”

Harmon raised the work-surface to a 20 degree angle, bringing the surface more parallel to the face.  This significantly reduced the compression of the intervertebral discs.    He also controlled the lighting, and turned blackboards green.  (You remember blackboards, don’t you?)

In the fall of 1942, after six months in the remodeled classroom, “only 18.6% of those examined in November showed visual difficulties, as compared with 53.3% tested six months previously.”  There was also a significant reduction of posture problems (reduced by 25%) and chronic fatigue (55%).

As I discovered this information, I felt comforted by the fact that Dr. Harmon had unearthed these remarkable findings.  I presumed his work was a top concern for most educators, considering the enormous impact it has on learning.  Unfortunately, I don’t believe this is the case.

Do these issues continue today?  (Take a guess.)

As I noted earlier, much of the information in this post comes from Sarah Cobb’s 1990 article.  She writes something that strikes me as applicable today.

She was visiting a school in 1990, and noted, “As in Harmon’s day, windows covered the top half of one wall.  There were no shades on the windows, as they were tinted.  The children sat in two-person desks arranged in a horse-shoe fashion with some children facing the windows (light) and others with their backs toward them.

“Many of the children were sitting on books.  Over half of the tables were paired with tiny chairs.  When I spotted our therapy patient, her desk was so high that even with erect posture, her eyes would be less than 6 inches from the table.”

Cobb’s observations occurred in 1990.  Surely, with the onset of computers and heightened awareness of ergonomics, times have changed, right?

It appears not.  In “Ergonomics Enters the Classroom” by Jeanie Croasmun from 2003, she writes, “Aside from a few states’ attempts to limit the weight of books and supplies being crammed into a student’s backpack, very little information regarding ergonomics is being presented at school.

“Yet these same kids sit in desks, work on computers, play sports and video games, and are continually reporting more and more injuries that could be mitigated by proper ergonomics.”

More recently, in Eric Steinman’s 2010 article entitled “Pain in the Class:  The Ergonomics of the Classroom Desk.” “We perpetuate a culture of discomfort and bad ergonomics for our young students, even though it has been proven that the right chair, the right posture, and the right fit can greatly improve performance across the board.”

While schools hang from their fingernails in the attempts to survive never-ending budget crises, the topic of improved ergonomics is never considered a high priority.  Politicians and educational pundits cry for educational reform, but none of them take advantage of the low-hanging fruit and embrace the empirical data of Dr. Harmon.

What can we do?  Spreading the word to the educational community about Dr. Harmon’s findings is a great step toward eradicating the American Optometric Association’s statistic that 1 in 4 children have a vision problem that impairs their ability to learn.

Here are some key tips to help you apply Dr. Harmon’s findings to your student, your child or yourself.

Lighting:  You want to use as much natural light as possible, and avoid having excessive glare on either a printed page or a computer screen.  Avoid having a window directly behind a computer screen or right in front of it – windows should be off to the side.

When reading, your head should not create a shadow on the page.  Look for light that’s evenly distributed.

Viewing surface:  Ideally, your face should be parallel to either your book or your computer screen.  (See picture 2.)  Follow the Harmon Distance, and use the slant board when reading. 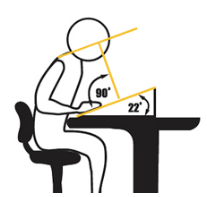 Posture:  What is your body doing?  Is the placement of this paper centered or is it off center from the plane of regard?  Your feet should be flat on the ground, and your legs should form a 90 degree angle.  Try not to slouch – remember you’re wasting energy.

For more resources, download our tips for reducing computer eye-strain.  And don’t forget that if you “Like” our Facebook page, you’ll not only get access to more informative articles like this, but you’ll also be entered into our monthly drawing for a free slant board.

Let’s revisit the important work of Dr. Harmon, for the good of our children.  Less Harm, More Harmon!

Remember to Like Us on our Facebook page to enter the drawing for a free slant board!  We'll be drawing a new name every month!