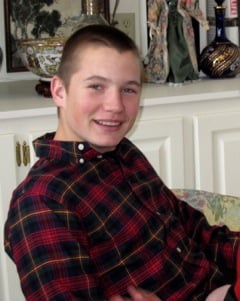 In school, Jack Coakley would often look away from his desk and gaze out the window.  His teachers thought he wasn’t paying attention.  It wasn’t until he visited The Vision Therapy Center that his parents and teachers realized this apparent lack of attention was really a functional vision problem.

Jack, now fourteen and a freshman in high school, had been having problems in both school and sports for a number of years, according to his mother Kathy.  “He had a hard time paying attention in class,” she said.  “He would look off into space, and he had a hard time following along.”

Believing the problem was Attention Deficit Hyperactivity Disorder (ADHD), the Coakleys took Jack to Dr. Lori Pyter, a clinical psychologist.  She ran a gamut of ADD tests, and then reported some surprising results to the family.

“She told us that while she wasn’t a vision expert, she suspected Jack might have a vision deficiency,” Kathy recalled.  “So she referred us to The Vision Therapy Center.”

The Coakleys took Jack in for a Functional Vision Exam.  Afterward, they discussed the results with vision therapist Lisa Dudzinske.  She asked Jack if he found himself looking away from his paper, and then back to it after a while.  “He was trying to rest his eyes, and bring them back into focus,” Kathy said.

One by one, Lisa listed symptoms, and described how functional vision problems can cause them.  “At one point, she slid a box of tissues to me, because I had begun to cry,” Kathy recalls.  It’s a common reaction we see from parents when they finally find an answer to their children’s struggles.

Jack Didn’t Know He Had a Problem

The Coakleys learned that Jack was suffering from Intermittent Alternating Exotropia. In this condition, one eye or the other drifts out at times. Because of this, Jack’s eyes weren’t always aimed at the same point in space, which is important to see clearly, comfortably and accurately.

As the family learned more about the condition, Jack’s symptoms began to make sense. In sports, for example, he complained his contacts were bothering him, and he was having trouble seeing the lacrosse ball.

When told about Jack’s complaints, his optometrist reported that his eyesight was fine, and that he was seeing 20/20.  But 20/20 eyesight is merely a measure of how clearly you can see at a specific distance.  It does not take into account depth perception, eye tracking and teaming, and other functional vision skills.

Jack embarked on a six-month vision therapy treatment.  Kathy noticed he quickly became dedicated to the program.  At seven o’clock every Friday morning, he would visit The Vision Therapy Center for in-office therapy with vision therapist Brian DelFosse.

“He never complained,” Kathy recalled.  “He was committed do the program, and he was seeing results.” Every three months, Dr. Brandon Begotka would perform an evaluation, and Jack could see how he’d progressed.

Soon, Jack graduated from vision therapy, and the results were extremely positive. “His grades improved during the first semester of his freshmen year, and we attribute some of that to better focus and concentration,” Kathy said.  While noting that not many 14-year-olds “love” school, his first year at high school was better than ever.  Jack is now also able to study for longer periods of time.

In sports, he also experienced his best year of downhill ski racing.  “He’s able to see the race gates with greater depth perception and clarity,” Kathy said.  In lacrosse, Jack was able to pass, receive and shoot much more accurately.  “He can also see the ball more clearly,” she added.

The Coakleys believe it’s a shame more people don’t know about vision therapy.  “When I talk about it to other people, I often hear parents say that their child might be suffering from the same problem,” she remarked.