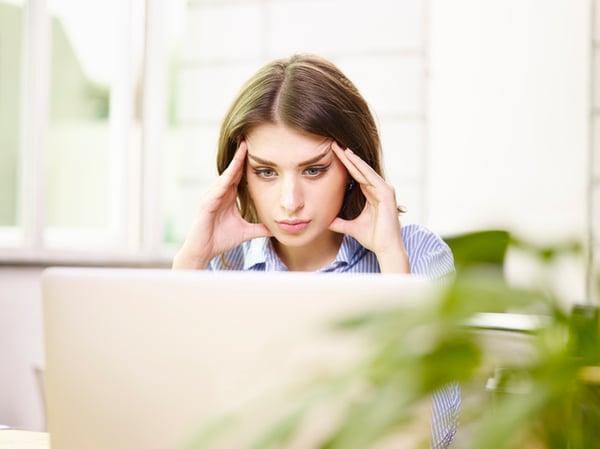 We’ve entered a new age of computer usage, but have we also entered a new age of vision problems as a result?  Research indicates that vision problems, such as computer eye strain, are on the rise in the workplace.  It’s a development that is starting to hit businesses in the pocketbook.The research was reported in a recent Optometry Times article.  According to Transitions Optical’s annual Employee Perceptions of Vision Benefits survey, 79% of employees encounter at least one visual disturbance that bothers their eyes at work.  More than half (53%) admit to taking at least one break a day because their eyes feel uncomfortable.

The numbers were not surprising to Dr. Kellye Knueppel of The Vision Therapy Center.  “Approximately 25 percent of people have problems with eye teaming and focusing,” she said.  “When you add in the visual stress that comes with near work such as computer work, then the numbers start to climb.”

Some other significant results include:

Potential Solutions May be Surprising

We’ve blogged extensively about Computer Vision Syndrome and the importance of practicing good vision habits when using the computer.  (Be sure to download our informational guidelines at the end of the blog.)

Dr. Knueppel also offered up a method for relieving eye strain that many will find surprising.

She was working with a kindergarten teacher who could tell when her students’ eyes were getting tired.  When she sensed fatigue was occurring, the teacher would turn off the light and tell the kids to put their heads down.

It sounds like a logical action to take, but Dr. Knueppel believes looking at far-away objects could have been more effective in relieving eye strain.

“Our eyes relax when they look at far away objects,” she said.  “When they are looking at near objects, they have to focus and work harder.”  The teacher would have been better off having the kids look out the window and focus on far-away objects.

Dr. Knueppel notes that some nearsighted people might find faraway objects to be blurry, and may try and squint to see them.  This defeats the purpose of the exercise.  “You want your eyes to relax,” she said.  “If the objects are blurry, then let them stay blurry.”

Besides Dr. Knueppel’s “look away” technique, there are a host of other vision habits to consider when using computers or handheld devices.  The most critical concept (and probably the most difficult one to execute) is achieving balance.

Instead of trying to restrict phone and computer usage, balance it out with some types of ball-based sports, or engage in an activity that requires looking at objects in real space (not virtual space).  The goal is to get the eyes to focus on a variety of different objects, allowing them the rest they’re not getting with continuous near work.

Will these types of accommodations and techniques come to the workplace?  They’ll have to.  The Optometry Times reported a previous study found that “eye-focusing problems, which can occur with eye strain and fatigue, may cause employees to lose up to 15 minutes of working time a day…this translates into employers losing more than $2,000 per year per employee who suffers from this issue.”

As is usually the case, the only way to get people to change their habits is to hit them in the pocketbook.  With computer eye strain, businesses are starting to feel the hit, and unless they take action and start promoting good vision habits, the number of cases will likely grow.