Are Hidden Vision Problems Holding You Back in Sports? 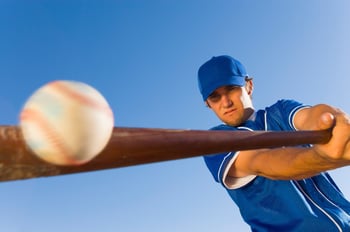 As summer approaches, so does a student athlete’s off-season conditioning. While coaches tend to emphasize weightlifting and sprints, addressing hidden vision problems could be another way to up your game.

You might be able to jump three feet or bench press 400 pounds, but if you can’t see, your game will suffer. That’s why we encourage every athlete to get their vision tested. Even if you have 20/20 vision, functional vision problems can prevent you from performing at your best.

When considering “good” vision, most people simply think of 20/20 vision. The term “20/20” refers to our visual acuity, or how clearly we’re able to see detail at a given distance. Obviously, clear vision is critical for any athlete to catch a ball, see distance markers and perform other in-game tasks.

Yet, there are many other visual skills used to accurately see objects in space that are crucial for every athlete to have. These visual skills make up what is called “functional” vision and include: eye teaming, tracking, focusing and visualization.

Why Good Depth Perception is Crucial for Athletes

For any sport that requires the tracking of an object, good depth perception is a must. These sports could include baseball, soccer, tennis, lacrosse, and football, just to name some.

The reason why might seem obvious. Athletes with good depth perception will have an easier time accurately tracking the ball (or whatever object) as it approaches because they can accurately see where it is in space. Baseball players, for instance, must make split-second decisions about when to swing their bat to make contact with the ball. To those with good depth perception, the ball may even appear bigger, making it easier to hit.

Just because you may have poor depth perception now doesn’t mean it’s too late to improve your vision and your game. Larry Fitzgerald, a wide receiver for the Arizona Cardinals, had vision therapy as a child to correct his depth perception issues. Now, he’s an elite pro-bowler in the NFL.

We have two types of depth perception: Monocular (one eye) and binocular (both eyes). Both of these depth cues are needed to accurately determine where an object is in visual space.

Each eye must be able to accurately perceive space - and work together - for optimal performance in sports. That’s because each eye produces a slightly different image of a target, which the brain combines into one, three-dimensional image. If you have poor space perception in one eye, it will negatively impact your depth perception.

Several vision problems can account for poor depth perception, although two treatable ones tend to be the most prevalent.

* Strabismus - Better known as “crossed eyes,” strabismus refers to a person’s eyes being misaligned. One or both eyes might point in a separate direction than the other - either up, down, left, right, diagonally or even rotationally.

To avoid seeing double, the brain halts communication with one of the eyes. This phenomenon is referred to as suppression. This forces the brain to receive just one clear image, making it easier to comprehend.

The problem is, as we described before, both eyes are required to see good depth and dimensionality. So, while the brain’s nifty compensation technique may prevent double vision, a person’s depth perception will suffer as a result.

* Amblyopia - Many people refer to amblyopia as a “lazy eye,” where one eye fails to produce as clear of an image as its counterpart. Similar to the suppression that can occur with strabismus, the brain often ignores the less clear eye,which reduces depth perception.

Less severe vision problems, such as difficulty with convergence, can also cause difficulty with space perception and sports performance.  These problems are more likely to be missed in a screening or a ‘standard’ vision exam.

A Functional Vision Test can identify ambloypia, strabismus or any other functional vision problem a person might have.  Vision therapy can train the eyes to work together, improving a person’s binocular depth perception to help you perform better in sports, off the field in school or in daily activities.  Even if the condition remains, we can often improve the function of someone’s vision by training the brain to interpret the visual information more efficiently and accurately.

The sooner you schedule a Functional Vision Test, the quicker we can determine if a vision problem could be plaguing your depth perception. Schedule one this summer, so you can start addressing any problems though vision therapy, and return to the field and/or court ready to play!