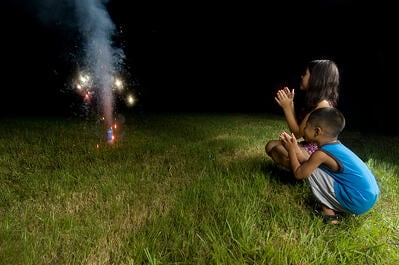 Sometimes I think we've become immune to statistics. Every day we’re bombarded with so many stats that I think we tend to gloss over them.  That’s how I felt about the statistic “12 percent of fireworks-related injuries involve the eyes.”

What does that statistic boil down to in actual numbers?

Let’s first start with how many people are injured from fireworks.  According to a report from the U.S. Consumer Product Safety Commission, fireworks were involved in an estimated 8,700 injuries treated in U.S. hospital emergency departments during the calendar year 2012.

Those numbers aren’t overly staggering when compared to the number of motor vehicle deaths, for example.  About 115 people die every day in car crashes nationwide, but you don’t see people opting for mass transit out of fear of a traffic fatality.

It’s a risk management thing.  If you think the chances of getting in a car accident every day are worth the rewards of commuting to work and earning a living, you might take that risk.  Others might not.

The same applies to fireworks.

If, nationwide, only 8,700 people were injured during 2012 (we don’t have anything more current than that statistic), and only 12 percent of those injuries were to the eyes, it seems like a relatively safe bet that your child can play with fireworks and not worry about injury, right?

But what if your child is one of those injured?  How would you feel if you read this post, done the risk management calculations in your head, and decided that the odds were worth rolling the dice?

Is The Vision Therapy Center Oversensitive to Eye Injuries from Fireworks?

Can we find a balance?  Can our children participate in 4th of July activities safely?

Well, no.  For children, the advice across the spectrum says children simply shouldn’t play with fireworks.  This is from the Kids Health website:

“Kids should never play with fireworks. Things like firecrackers, rockets, and sparklers are just too dangerous. If you give kids sparklers, make sure they keep them outside and away from the face, clothing, and hair. Sparklers can reach 1,800°F (982°C) — hot enough to melt gold.”

I’m not sure about you, but I’d rather not let my child near anything hot enough to melt gold.  I can only cringe at what effect something like that could have on a child’s vision.

Perhaps it’s the fact that we work so much with vision that makes The Vision Therapy Center particularly sensitive to eye injuries.  We know the impact a loss of vision in one eye, for example, could have on a child.

It can affect their depth perception, and impair their ability to play sports.  Use of only one eye could lead to eye-strain and make reading and concentrating more difficult. 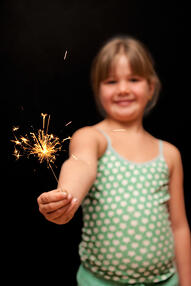 I know I’m treading on a touchy subject, as fireworks are such an ingrained part of our culture.  You be the judge of whether it’s worth the risk to your child’s vision and overall health.

To me, there’s too many other ways to celebrate our country’s independence than a mad dash to the emergency room.  That’s a risk and a trip I don’t care to take.