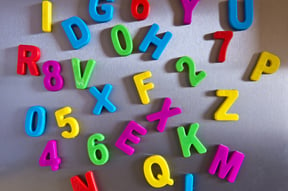 Parents often visit us believing their child is dyslexic based on the fact that they reverse letters and/or numbers when writing and/or reading. However, you may be surprised that sometimes symptoms that look like dyslexia can actually be a vision problem.

Dyslexia.org defines dyslexia as a severe reading problem of neurological origin in a person with average or above average intelligence, for whom there are no other physical, medical, or psychological conditions sufficiently serious to account for the language handling deficits.


1. Laterality/Directionality Problem - A person may reverse letters because they are unable to distinguish right from left on themselves (laterality). Poor laterality usually underlies an inability to recognize right from left on other objects, such as letters and numbers.

Most children in first grade or lower haven’t developed directionality skills. That’s why you might see a young child holding their hands in an “L” shape to determine their left hand from their right.

However, by the time a child is in second grade, they should have developed the skill of directionality. If left/right confusion persists, they’ll struggle to distinguish similar letters from one another, such as “b’s” from “d’s” and “p’s” from “q’s.”

2. Visual Fatigue - A child whose eyes grow fatigued will likely read at a considerably slower pace, which is a common symptom of dyslexia. Intermittent strabismus is one of many functional vision problems that cause eye fatigue.

Convergence Insufficiency is a vision problem where one or both eyes become occasionally misaligned, often made worse by visual stress or when the person is tired or ill.

A child with this condition is able to keep their eyes aligned, provided they have enough energy. For people with convergence insufficiency, maintaining alignment of the eyes takes a tremendous amount of effort, especially towards the end of the day when their eyes grow tired.

At that point, they may experience extreme visual fatigue, which can result in performance issues like reading a word on one page and then being unable to read it again a page later. Other functional vision problems such as convergence excess and intermittent strabismus can produce this same effect.

3. Poor Control of Eye Movements - Some people view extremely choppy reading as a symptom of dyslexia. However, functional vision problems are often at the root of some of these same symptoms.

One of these vision problems is a lack of control over eye movements, which can cause choppy reading due to line and word skipping.

A common theory about dyslexia is that people have a difficult time comprehending words like “the” and “it” because they are impossible to visualize. In some cases, poor eye movements can cause the person to skip these small words leading to difficulty with comprehension.

Vision therapy uses a series of exercises and activities to help patients overcome their functional vision problems. Because a directionality issue is the vision problem most commonly confused for dyslexia, we’ll use it as an example to explain vision therapy’s methodology.

Our activities to improve laterality include physical activities to help our patients “feel” the difference between the left and right side of their body.

For example, we may ask a patient to hold a weighted object, like a jug of milk, in their right hand, and extend it in front of their body for as long as they can. When the weighted object is removed, their right arm will continue to feel heavier.

With so many similar signs and symptoms between dyslexia and functional vision problems, how can you know which is the root cause of your child’s reading problems?

Determining the issue requires a Functional Vision Test, which lets us identify vision problems in a person. Only testing allows us to determine or rule out if a vision problem is the cause of your child’s reading problems.