Why Amblyopia Patching and Computer Game are Failing to Succeed 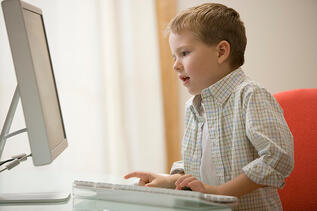 We’ve kept a close eye on the use of computer games to help treat amblyopia, or lazy eye, as it’s commonly called.  A company that builds these games recently went bankrupt. The reason appears to be tied less to a poor business model and more to a lack of understanding the short and long-term outcomes of amblyopia treatment.

Before we delve into the details surrounding video game creator Caterna and its bankruptcy, let us state for the record that we are very intrigued and encouraged by the use of technology in correcting functional vision problems.

Vision therapy involves using many different activities to train your visual system to work properly, and there are some very exciting developments occurring with technology.

However, we have also seen many short-term successes that result in long-term failures, primarily because many of these companies do not understand the root cause of the problem concerning amblyopia.

When a person has a lazy eye, one of the eyes does not see as clearly as the other even with glasses.  A number of factors can cause this, such as an eye turn, a large difference in the prescription (farsighted, nearsighted, astigmatism) between the two eyes, or even pathology.

To create three-dimensional viewing conditions, the brain combines the signals it receives from the two eyes. However, when the vision in each eye is significantly different, the brain suppresses (ignores) the information collected by one of the eyes.

To restore binocular vision, the eyes must learn how to work together again.  This can be accomplished through vision therapy, which uses visual activities to retrain the visual system.

The ideal scenario is to combine vision therapy with patching, as we’ve touched on in this previous post.

We think that the problem with Caterna’s program wasn’t necessarily that it was ineffective.  It’s that they didn't understand what would be needed to ensure long-term success.

Here’s how Caterna’s business model worked. The company gave the computer program to doctors in exchange for a license fee.  The doctors then let their patients try the program for free. After four weeks, the patients would have the option to purchase the program.

Unfortunately for Caterna, this business model didn’t work.  Patients were achieving success after four weeks, and didn’t believe a purchase was necessary.  But we doubt any patient was truly cured for the long-term.

The computer program used a patch over the “better eye” and retrained the non-preferred eye to start “working” again.  We have no doubt that after four weeks, the non-preferred eye would experience improved functionality.  Thanks to the patch, the brain would use the only eye that it could.

As a result, the amblyopic eye made significant progress, and the family would assume all was well.  They would pass on the program, and Caterna wouldn’t make any money.

We’d really be interested in how the amblyopic eye performed over the long-term. We don’t think the results would be good.  The two eyes were never retrained to work together, and the brain may eventually suppress the signal from the amblyopic eye.

Caterna’s solution to this issue is to offer a three-month license, noting that the program needs to be practiced beyond four weeks.  “It’s very important that the patients don’t stop after four weeks, but keep using the program to insure long term successes,” CEO Nicolaus Widera says.

He’s right that four weeks is not enough to ensure long-term success.  We also feel that patching alone won't work unless it's combined with in-office vision therapy to retrain the visual system. This will ensure the changes last.

Caterna’s program may indeed be effective and ensure patching is being done correctly. Together, with in-office vision therapy, it could be extremely effective, as long as the eyes are working together.