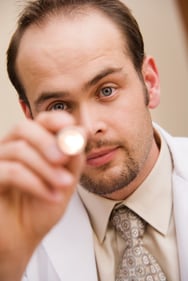 Given the rising concern with concussions among young athletes, doctors are developing new ways to test for them. At the forefront of one of the newest and most efficient concussion tests? Testing a person’s entire visual system.

Many people overlook the severity of concussions. Concussions are a type of mild traumatic brain injury usually caused from blunt force to the head, often from contact sports like football, hockey, lacrosse and soccer. This causes the brain to crash into your skull, bruising or injuring it.

That’s why doctors are constantly coming up with new ways to test for concussions. Now, three in Rapid City, South Dakota are at the forefront of an extensive new testing program that incorporates the entire visual system, and is gaining traction around the country.

Using the Entire Visual System to Test for Concussions

Where does vision happen? Most people would say the eyes. But in fact, the eyes are simply the portal through which the brain acquires visual information. The bulk of our visual system’s processes occur in the brain.

Therefore, it shouldn’t come as any surprise that a traumatic brain injury - even a mild one like a concussion - can have a severe and immediate impact on a person’s vision. Here are some of the immediate signs that doctors look for to indicate a concussion:

Yet, our visual system stretches far beyond our ability to see. Vision mediates between 80 and 85 percent of our perceptions, including the way we learn, move and complete activities. That means in addition to eyesight, vision affects our motor skills, coordination and our entire perception of the surrounding world.

It’s why the team from South Dakota is taking a multi-sensory approach that includes the visual and vestibular system to test for concussions.

“We've gotten to the point where we've started doing vestibular ocular assessments looking at the eyes and the balance and some of the systems of the brain and body that get affected by a concussion," said Dr. Chris Dietrich, one of the doctors on the team.

Their testing program begins before an athlete even takes the field, with an “impact baseline test.” This test shows how an athlete functions under normal conditions so doctors have something to compare, should that athlete sustain an injury.

In an injury occurs, doctors will start with an eye test to look for the signs we discussed earlier.

"If somebody doesn't have good tolerance at this point after a concussion to light, to noise and to reading they're just going to be overloaded," Bushing said.

The test only takes 35 minutes to complete, allowing the doctors to test athletes more accurately - and efficiently - than ever. Right now, Dietrich said his team is testing hundreds of athletes and kids who will participate in sports come the new school year.

Those of us involved with vision therapy have known for some time how concussions affect the entire visual system. It’s why we incorporate visual and full-body activities into our programs for concussion patients. It’s encouraging to see these methods put to use for concussion testing, so diagnoses - and treatment - can be improved.

Also, if you are an athlete who is not currently experiencing vision problems, you can visit us at The Vision Therapy Center to get a baseline functional vision test performed.