3 Ways Vision Can Make Learning After a Concussion a Nightmare 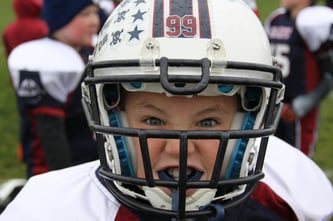 To the list of parenting worries, add the prospect of your child suffering a concussion in sports. In addition to a slew of short-term effects, learning after a concussion can be a major challenge -- primarily because of how your child’s vision can be affected.

Concussions have become so common in sports today that it’s easy to overlook just how devastating they can be. After all, we see football players take crushing blows to the head, only to return to the field a week or two later - or even on the same day.

However, a concussion is nothing to sneeze at. Concussions are actually a mild traumatic brain injury, where the brain crashes into the skull, bruising or otherwise damaging it. Blacking out sometimes accompanies a concussion, but most occur without a person losing consciousness.

Common concussion side-effects include dizziness, ringing ears, nausea, confusion and headaches. Yet few people realize that concussions can also affect a person’s learning capabilities, primarily due to their lasting effects on vision.

The good news is that these symptoms can often be improved if you know where to turn for help. Here, we’ll detail a couple of case studies and explain how vision therapy can help improve these debilitating concussion symptoms.

From Avid Reader to Struggling Reader

We recently came across a fantastic article on the topic from the College of Optometrists in Vision Development (COVD). In it, they discuss two children who suffered concussions while playing sports, and consequently faced new and frustrating learning issues in the ensuing months or years.

One of these children was Shelby Hedges, who experienced a concussion in during her first high school soccer game. Before her injury, Shelby was an avid reader. That’s why it was such a shock that even a month after the injury, she was struggling with reading and schoolwork.

Fortunately, Shelby received a referral to a developmental optometrist early on who - through a series of exercises that we’ll discuss later - helped her through her newfound learning problems.

But not all children are so lucky. Sixth-grader Kelsey Ransom was already struggling with reading when she obtained her second concussion playing basketball. She had been previously diagnosed with a Non-Verbal Learning Disorder following her first concussion, though a psychologist told her mother, Lisa, that Kelsey’s IQ was “off the charts.”

Lisa’s natural reaction was to believe that Kelsey simply wasn’t putting enough effort into her schoolwork. It wasn’t until they finally visited a developmental optometrist that she realized the true culprit was a vision problem stemming from her concussions.

“She had been complaining of visual issues for a year, we just didn’t know they were due to vision,” Lisa said. “We thought it was a learning issue.”

So why does this happen? What does a concussion have to do with vision, and how can vision therapy help a child overcome these learning problems?

Vision is our dominant sense, affecting the way we learn, think and interact with our surroundings. What you might not realize, however, is that vision doesn’t just take place in our eyes - it takes place in our brains.

That’s why after experiencing a traumatic brain injury, even a mild one like a concussion, vision problems are common.

These issues may not be detected by an MRI or any other tests, but once a person returns to school or work, they realize something is off. Severity of the concussion or multiple concussions can make these visual symptoms worse or longer lasting.

1. Headaches, especially with close work - People often struggle to switch their focus from near to far and vice versa, which is a visual skill called accommodation.

They may also experience problems with eye teaming, known as convergence insufficiency. This is what caused the bulk of reading issues for both Kelsey and Shelby.

When the eyes aren’t working cohesively, they can cause severe headaches, especially when attempting to focus on near work such as reading and working on a computer.

To help retrain the eyes to work together, developmental optometrists depend on tools like lenses, prisms and 3D targets as well as eye movement activities.

2. Sensitivity to light - Intolerance to light and glare is another common symptom following concussions. This occurs when the brain fails to adjust to differing levels of brightness.

To help combat this symptom, developmental optometrists can use lenses, filters, occlusion and light therapy to improve light tolerance.

Take every precaution to keep your child’s head safe as they play sports this summer. However, if they do suffer a concussion, schedule an appointment with a developmental optometrist immediately to help ensure their ability to read and learn doesn’t suffer as a result.