Lisa Livieri was at the end of her rope.  She was receiving daily calls about her son Brent’s behavior issues.  She was also frustrated as her son struggled in school.  In this latest Vision Therapy Success Story, she describes how vision therapy has helped Brent make a remarkable transformation.

I had been running into a wall as to what I was dealing with, with my 6 year-old son. Day in and day out there were behavioral issues and calls home from his teachers. We tried different disciplines and nothing seemed to change his ways.

Then one day I ran across information regarding some vision exercises and learned that behaviors could stem from vision issues. I was not sold at the first thought of this. I talked to his teachers and they started to relay stories to me about his writing and reading abilities.

I had taken him to a neuropsychologist before this and he told me there was nothing wrong with my son. In fact, he said that I should stop with all this and just get him some reading help as he was “frustrated” as a reader. I laughed and thought, “I bet he is, as he is 6 years old.”

My gut instinct told me to disregard this doctor and move on. I did.

I took Brent to the vision therapy appointment to have some tests done on him. He failed most, if not all, of them miserably. Guess what? The little boy that was this handful of a child had many things that needed fixing with his vision. He was seeing double. He had convergence issues, meaning he could not make one view out of what he was seeing; he was making two.

Brent’s developmental optometrist, Dr. Heather Navarro, explains further:  “Brent had convergence insufficiency:  His eyes couldn’t converge onto a single object.  He also had a pretty severe ocular motor dysfunction.  This means whenever he was looking at a moving object that was slightly outside his field of vision, he had to move his head and body. Basically, he used his whole body to get his information. He also had sensory processing issues. Any sound would affect him and distract him.” 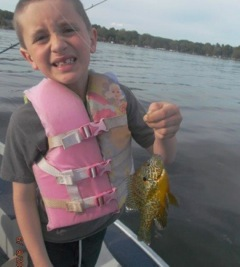 I felt horrible. Hindsight made me think back to about the age of 3 with him. That is when all the problems started with him. Is that how long he had been seeing the world through “double eyes?” My heart sank.

I sat with the therapist and the doctor to find out what the test showed and also what I can expect to do for him. The discussion led to a 36-week program which would take us to the Brookfield office every week for that duration. We live 1 hour from there. Sigh. What to do.

The next obstacle was the cost. This therapy is not covered by insurance. I ended up fighting with the insurance company, which resulted in three denials. They would prefer eye surgery on a 6-year-old than therapy that would help strengthen the muscles of his eyes. We would struggle to make ends meet.

The third obstacle was myself. I did not really have buy-in with regards to this whole method. Lots of research discussed how people did not believe there were real results from such therapy. So what is a mom to do when faced with being her son’s advocate and also faced with so many obstacles?

One thing I was given was my gut instinct when I became a mom, and my gut said there was something wrong with my son besides him being a naughty little boy and a “frustrated” reader. If I was going to be his advocate I thought I better find a way and stick to it.

So for 36 weeks, once a week, we drove to The Vision Therapy Center.

Dr. Navarro describes Brent’s therapy:  “We had him at 5:15 pm on Tuesday night, which was a busy time.  With his sensory integration problems, I had to do a lot of give and take, and work within the environment we have.

“Brent was sensitive to sound and easily distracted, but the biggest problem was he didn't trust what his eyes were seeing.  He acted out to avoid doing anything with his eyes - either said it's too hard, or got distracted and did something else.

“So we tried to do as much as we could in a private room, so he wasn't distracted.  I worked with games that interested him.  He liked throwing balls.  I used a game called Elefun that blows butterflies up in the air, and he had to look to find the butterflies.  The big thing was to get him to look, instead of him just guessing where to look.  We also worked on tracking.”

The weeks passed slowly, Week 1… Week 24… Week 36… I can’t believe we got to graduation of the program. Now do I believe? Yes. What were my son’s outcomes? He does not see double anymore. He writes legible letters. He can draw recognizable shapes. His behaviors have simmered down at school.

Dr. Navarro added: “Although he still struggles with left and right and alphabets, we've got him with better skills so he can progress on to more concentrated activities.”

Brent is enjoying life and I love being his mom. There is something to be said to a mother who doesn’t know if she can afford groceries one week so she can pay for therapy for her son’s eyes. You just do it.

My son told me a story that made me realize this therapy, dedication and sacrifice worked. He would go fishing with his dad and would never pull the fishing line when the bobber would go under the water level. My husband usually had to sacrifice the fish as the hook was almost always in the belly.

My son told me that now he can see the bobber go down and therefore he can catch bigger fish. My husband and I had never put two and two together. My son also told me that he can see bugs' wings move now. He could not before. 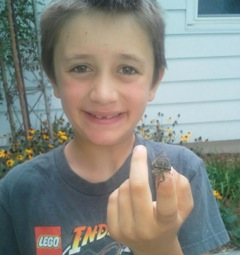 When I sit back and wonder if I would do it all over again. I shout "YES" because a mom will do anything for her children, even if it involves many sacrifices.