We see patients diagnosed with learning disabilities or labeled as problem children every day. Many of these children simply have a vision problem.

This test does not require the same amount and types of eye movements that reading does, so it cannot be used to determine whether a child has the visual skills necessary to read. While clear vision is important, it is only one of many visual skills required to be able to read and learn.

An enormous amount of information comes to a child through visual pathways. It’s essential that the visual system is working efficiently to ensure a child reaches his or her maximum potential.


What are some of the visual skills that affect learning?

When reading, the eyes should aim inward at the same spot in order to fixate on print. If the eyes aim at a spot in front of or behind the print, extra energy and effort is required to maintain fixation and double or overlapping vision may occur. Here is an example:

Directionality is important in understanding how similar shapes can have different meanings when they are in different orientations. Below is an example of some letters that are commonly reversed by children with poor directionality. The letters are the exact same shape, but are called a different name depending on their orientation.

This can be a difficult concept because if another object, such as a chair, is turned on its side or upside-down it is still called a chair. 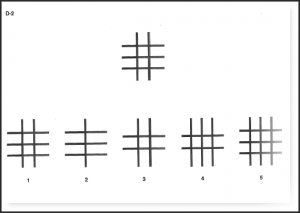 Children who can read at accelerated speeds often have a good span of recognition, allowing them to recognize and process several words at one time. Children lacking this skill may only be able to see one word or letter at a time. In order to see what this would be like, try reading a sentence or paragraph while looking through a straw.

Visualization is the ability to create mental images. Children who have vision problems may also have difficulty with visualization. This skill is important for success in many school subjects including spelling and math.