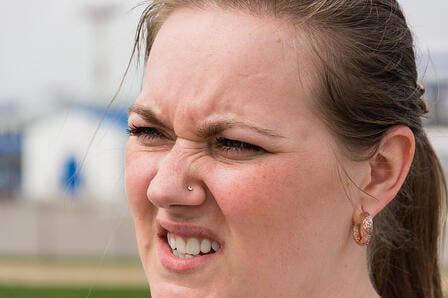 Does your child suffer from frequent headaches, or have eyes that sting, ache, water or tire? These may be symptoms of eyestrain and a stressed visual system, and may be caused by a functional vision problem.  Here are ten tips to help ease the strain.

Before we delve into methods to relieve modern-day visual stressors, let’s define a functional vision problem.

Functional vision is more than just the ability to see an object clearly.  It also includes how your visual system sees and processes an object in space.

For example, depth perception is a functional visual skill, and so is eye tracking, which allows you to follow the flight of a ball through space.  These skills are made possible when the brain, the eyes and the visual pathways are all working properly together.

When they’re not, eyestrain symptoms become more prevalent.  For example, if your brain can’t combine two images produced by the eyes properly, you won’t be able to see in 3D.  That can lead to double vision, which stresses the visual system.

More Challenges to the Visual System

Regardless of whether your child has a functional vision problem, visual systems undergo more stress now than ever. Today’s students read three times as many textbooks as their grandparents did. Everyday use of computers has increased the amount of time spent doing near vision tasks.

“Near vision tasks” equates to visual tasks within an arm’s length. Working excessively in this space can cause visual stress that may lead to headaches and blurred vision, and can also impair one's visual performance. In today’s society, students and those in the workforce are doing more near vision tasks than ever thanks in large part to the digital revolution that began circa 1950.

Our eyes have struggled to adapt to this cultural surge in near vision tasks, which has caused an unprecedented increase in visual stress and impacted the quality of life of millions of people with vision problems.

There are many things you can do to ease the pain imposed by visual stress.  These ten tips are helpful for all, but are especially helpful if you have a functional vision problem.

1. Take breaks. Whether you are typing at a computer or reading a book, you need to give your eyes an occasional break.  Every 15 minutes, focus on an object 20 feet away for 10 seconds.

2. Use proper lighting. People think it is OK to read under a single lamp in a dark room. It isn’t. What you are focused on should be at least three times brighter than the rest of the room. This is especially important for close-up work.

3. Be mindful of distance. Near work such as reading or writing should be completed at a distance equal to the space between your middle knuckle and elbow (called the Harmon distance). This is 14 to 16 inches for adults.

4. Sit up straight. Sit with your chest up and shoulders back, and place your weight over the seat. This aligns both eyes with the near vision task and allows for good breathing.

5. Avoid reclining postures. Refrain from laying on your stomach, side, or back while reading or watching television. Instead, sit upright.

6. Write without tilting. Try to hold your pen or pencil an inch or so from the tip, so you can see what you are writing or drawing without tilting your head or body sideways.

7. Use a slanted work surface. A tilt of 20 degrees is ideal.

9. Go outdoors. Participate in outdoor activities that require you to interact with visual space such as basketball or bean bag toss.

When you go for a walk, keep your head up and look toward objects instead of staring straight at them.

10. Use lenses, if necessary. Prescribed near point lenses can relieve discomfort and enhance your child’s learning and visual skills. (Consult a developmental optometrist for the proper lens prescription.)

Visual stress can lead to lower achievement, particularly if you or your child has a functional vision problem.  Only a Functional Vision Test will determine if the visual system is working correctly.

To determine if the symptoms mentioned at the beginning of this post are being caused by a functional vision issue, schedule an appointment with a developmental optometrist.