Lazy Eye Overlooked Because Only 25% of Children Visit Optometrist? 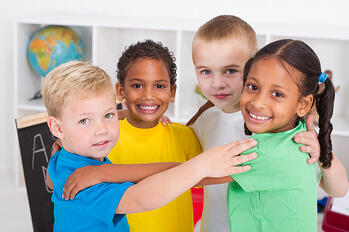 Why is lazy eye, or amblyopia, often undetected in children?  One reason could be that only 25% of children visit an optometrist. That statistic, coupled with a lack of public awareness about lazy eye, means that many children will unknowingly suffer from a functional vision problem that can significantly impact their lives.

According to a post that appeared on TheConversation.com, only 25% of children visit an optometrist. That number is both alarming and frustrating when compared to the statistic that 70% of children see a dentist once a year.

Why the discrepancy?  The Conversation post highlights some of the major reasons, which we’ll recap here.  We’ll also add a few of our own to the mix.

No problem, no need for a visit.  The annual visit to the dentist is definitely warranted.  Teeth need to be cleaned, and especially with children, cavities are always a concern.

With vision problems, unless a child complains about blurry vision or not being able to see the board at the front of a classroom, a parent may not feel compelled to take the child in for a visit.

This is the problem with functional vision problems in children: Because the child has had a vision problem, generally their entire life, they don’t even know they have a problem.  They think everyone sees what they see.

In a case like amblyopia, or lazy eye, one eye doesn’t function as well as the other eye.  It is failing to produce a clear image, and the brain will ignore it and choose the image from the other eye.

A child won’t know this is happening.  They don’t know why their depth perception is poor, or why they have difficulty tracking a line of text on a written page.  They don’t know, so they won’t tell us and prompt a visit to the optometrist.

Lazy eye is not on a parent’s radar.  It seems like every parent is aware of the dangers of cavities and tooth decay, but functional vision problems simply aren’t on everyone’s radar.  Perhaps it’s due to the misconception that these are rare problems.

As the article points out, that’s not true.  “Eye disease and severe visual impairment in children are rare, but the prevalence of significant disorders such as amblyopia (lazy eye), strabismus (squint) and hyperopia is in fact around 7%, or about two children in a class of 30.”

If 7% of kids had the stomach flu, that would definitely garner some attention.  But again, because lazy eye and other functional conditions are hard to detect, the issues go untreated.

Not sure of the symptoms.  This is a big one, especially with lazy eye.  Symptoms can be difficult to detect, primarily because the child has learned to adapt to the functional vision problem.  They know how to get by despite their visual problem.

Note that we said “get by.” Just because you’re living with a functional vision problem doesn’t mean you’re okay.  Think of it as a limp: Yes, your child could get through life with limp, but could you stand by and watch them struggle?

In terms of symptoms for amblyopia, they can include extra clumsiness, as their gross motor coordination is being affected.  As we noted in this post, the visual system leads the way in gross and fine motor development. 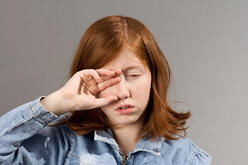 Your child may also experience headaches or watery eyes.  They may have trouble with their attention span.  These can all occur during the time their visual system is being challenged, such as doing homework.  It's because the system is straining to compensate for the lazy eye.

What can we do to increase the number of visits for annual functional vision tests?  It’s similar to any public health problem.  The more we discuss the issue and exchange information about it, the sooner we can help children who may suffer from amblyopia.

Please share this post through social media, or email it to your friends.  Let’s get 25 percent up to 100 percent - and help a lot of children in the process.